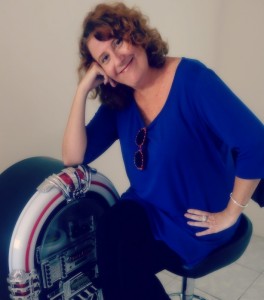 I have never once considered this! How did I get to this age without ever having a favourite word? In my manuscript the word ‘just’ crept in all the time and had to be surgically removed. I also say ‘cool’ a lot – which is very uncool.

I don’t think I’ve ever had a book boyfriend. Isn’t that sad!? I’m always more invested in the female character’s journey. That said, I couldn’t help but fall in love with my male character, Andy. While he often gets up to no good, he’s so adorable. And did someone mention “rock star”?

Baby, from Dirty Dancing. A day of Patrick Swayze teaching me how to dance would be bliss. I’d even happily carry a watermelon.

Not really, apart from plonk bottom on chair. I do find I have to type my story – no scribbling in notebooks for me. I think after so many years doing a computer-based job, my fingers in type mode do more thinking than my brain! 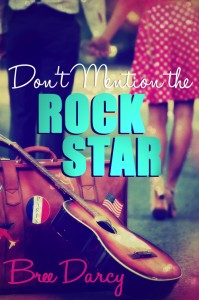 What’s your writing process like – how much planning do you do and when in the process do you edit?

I do a lot of editing for work, so I am not someone who can write a whole draft without going back and finessing as I go. So when I got to the first draft stage of Don’t Mention the Rock Star, it had already been reworked A LOT. I didn’t plan the plot or anything – my manuscript was simply divided into chapters and over two years I wrote bits and pieces of scenes, and pieced it all together as one (hopefully) logical journey later. I wrote the beginning and the ending early on – and then just had to figure out how to get from one to the other. I threw out and altered many plot threads right up until the last minute.

Because I am crazy about 80s music – there really was no better decade – it has to be an 80s track. Now while some might say Maniac (from Flashdance) might be fitting, I’m gonna go with When the Going Gets Tough, the Tough Get Going by Billy Ocean. If I was picking an 80s song to sum up Don’t Mention the Rock Star, it’d be either The Power of Love by Huey Lewis and the News or Don’t You (Forget About Me) by Simple Minds.

Have you ever suffered from writers block and if so, how did you combat it?

My writing days for working on this book were Thursdays and Fridays while the kids were at school. So of course every Monday morning when I needed to head off to work, my brain went into overdrive with zillions of ideas I needed to get down on paper that instant. Thursday mornings, however, found me staring at a blank page and mooching around on social media. But I would simply stay in my chair and write something – anything – sometimes it would turn into a good day, other times it didn’t. That’s the luck of the draw!

I did a lot of reading about writing craft and the business of being an author because I knew I had a lot to learn – I still do! Some of the take-home messages for me were:

About Don’t Mention The Rockstar:

They fell in love in an instant … so why have they spent a lifetime apart?

As a teenager Kellie dated an American boy but circumstances meant they went their separate ways. Now he’s back and she’s so tempted to see him again. But two decades have passed and they are both married with children.

And the last thing a celebrity reporter like her needs is the world finding out about her past relationship with a rock star. Especially as Kellie’s husband doesn’t even know she once dated AJ Dangerfield, lead singer of legendary band Danger Game. And she has no intention of him finding out. EVER.

As Kellie deals with a demanding boss, a bullied son, an infuriating mother-in-law and a best friend who won’t act her age, she finds herself playing a dangerous game. What will happen if her two worlds collide? And is it possible that first love never fades?

Bree Darcy is the pseudonym of Australian journalist Stephanie Pegler. She is the publisher of several popular websites for readers and authors, including Chicklit Club, Connect and We Heart Writing, and also runs the annual International Chick Lit Month event. She worked as a newspaper sub-editor in Perth for about twenty years, and is married with three children. Don’t Mention the Rock Star is her debut novel. For more information, visit www.breedarcy.com

Don’t Mention the Rockstar at Amazon US.

The blog tour continues on 16th February with Elle at Chick Lit Uncovered. Check out the banner below for details on the other stops too.

One Response to Blog Tour: Don’t Mention The Rockstar by Bree Darcy