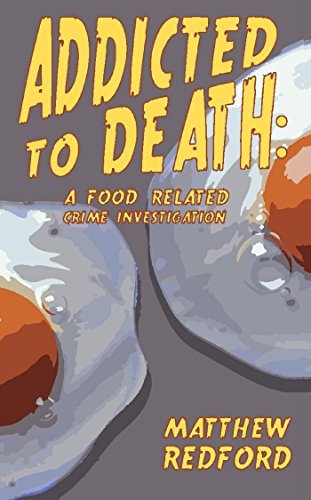 It’s my last stop as part of Clink Street Publishing’s #blogival event and I am pleased to be welcoming back Matthew Redford to Novel Kicks.

About Addicted To Death…

Following the murder of Benedict and Darcy Blacktail, two eggs savagely beaten to death outside their home by an unknown, fedora wearing assailant brandishing a large metal spoon, Detective Inspector Willie Wortel, carrot and the leading food detective in the police force, is called in to investigate.

When the only food sapiens minister in the Government, Professor Perry Partridge, is murdered at the Strawberry Strip Club, run by the young damson Victoria Plum, DI Wortel suspects that the two cases may somehow be linked.

As the Head of the Food Related Crime Division, DI Wortel is ably assisted by his human colleague Sergeant Dorothy Knox. But as their investigation begins, four celebrity chefs are sent death threats. It’s a recipe for disaster as the incarcerated evil genius MadCow McBeef is seeking parole; someone appears to have crumbled Mr Bramley’s apples; and there is an anti-GM food protestor on the prowl.

And why do Oranges and Lemons think they owe someone five farthings? DI Wortel and his team must find out who is seemingly addicted to death. It will take all efforts – human, fruit and vegetable – to figure this one out.

Thanks to Matthew and Clink Street Publishing, I’ve got an extract from his novel, Addicted to Death. Enjoy!

Wortel eventually prised Dorothy out the KGB offices after hearing more gossip about a tax evasion scam that included many famous celebrities including Gary Barley and Jimmy Carp. Wortel navigated the evening traffic, dropped Dorothy home, wished her a good evening and set off for home himself comforted by the thought of slumping onto his sofa and watching something completely pointless on the television.

The all too familiar sight of a rickshaw parked outside the house caused Wortel to sigh outwardly. Warren. Bang goes a quiet night. He braced himself and opened the front door. And was hit by an overwhelming smell of paint.

“Hello Mr Wortel,” called out Warren. “Mind how you go, the walls in the living room might be a little sticky. I wouldn’t want you to get paint on your suit.”

Stella poked her head out from the kitchen. “I’ll pop the kettle on. I hope you picked up some more that breakfast cereal.”

“What for?” replied Wortel feeling a little confused. “We’ve got four boxes in the cupboard.”

“Down to one box. It’s hard to stop once you’ve had a bowl and Warren certainly worked up an appetite today. He’s worked really hard.”

“Well I’ll have to get some tomorrow now. So, why can I smell paint?”

“Oh bless Warren. I mentioned how I wanted to get some decorating done but you’re always so busy. So he ran me to the superstore, helped me pick up some paint and he set to and painted the room for us.”

With Wortel feeling his shoulders begin to tense he walked into the living room to find the walls decorated a delightful shade of lettuce green.

“Warren thought it was a lovely colour,” said Stella following Wortel into the living room.

Wortel naturally hated the colour out of spite for Warren, and yet as much as he begrudged admitting it, he’d made a bloody good job with the decoration.

As night time approached and Stella insisted that Warren must be far too tired to cycle home, Wortel found himself in the loft recovering the inflatable bed. After blowing up the bed, and putting it into Jack’s room for their new guest, Wortel fled to the bathroom before he heard once again how wonderful Warren had been during the day. God, he hated that rabbit.