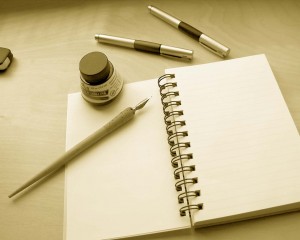 That first sentence has become my nemesis.

I’ve now settled into the New Year and have just about stopped writing 2013 when I should be writing 2014. The new year brought new but familiar writing goals which is to get the first draft finally written in time to submit to the RNA in August (especially as I didn’t manage it last year.)

I have been thinking a lot about the first sentence as I attempt the first draft. How do you pick the moment and the words that will begin your novel? It has caused a little bit of stress particularly as it’s easy to overthink. Of the many books on ‘how to write a novel,’ that I own, having a good first sentence that grabs readers attention seems to be a common thread.

Of course, I know that stressing about the first sentence is daft and counterproductive, especially as it’s the first draft but somehow, the logic doesn’t quite convince my writing neurosis. That seems to not want to listen by putting its fingers in its ears and saying “la, la, la, can’t hear you.”

The first line is important but on a first draft, it’s not. It’s easy to get caught up in perfectionism when you first begin (especially if you’re still trying to find your own rhythm.)

I have had to resort to disabling the delete key and telling myself that the delete key is being too eager for its own good and that it is not my friend – not at this stage anyway.

The first draft is just that – the first attempt. It’s there to get words down on a page.  Even that all important first line isn’t automatically set in stone.