Matthew Redford Talks About His Approach To Writing Short Stories 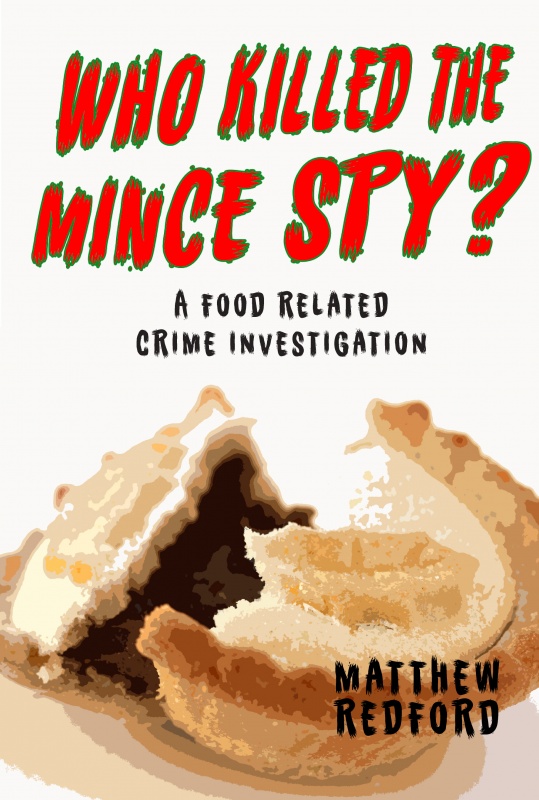 I’m pleased to welcome Matthew Redford to Novel Kicks today. His festive food related crime investigation short story is due for release by Clink Street Publishing in paperback and electronically own 6th December.

Snow White and the seven dwarf cabbages as well as having a run in with the food sapiens secret service, MI GasMark5.
With a thigh slap here, and a thigh slap there, the team know Christmas is coming as the upper classes are acting strangely – why else would there be lords a leaping, ladies dancing and maids a milking?

When I was asked to draft an article on my approach to writing a short story, I thought this would be a doddle. I mean, after all, I have written a short story – Who Killed the Mince Spy? – which is coming out in December 2016. Well, how wrong I was.

How do I approach writing a short story? Well, that is a really interesting question and it is not one which I have thought about before and I don’t recall having been asked the question before either. And when I sat down with the iPad in front of me ready to write my answer, I realised I didn’t know where to start!

So let’s go back to basics. How do I come up with my ideas? Well, I write about food sapiens, those walking, talking food items which live and work along us all. There are some famous food sapiens such as the musicians Polenta Faith and Fizzy Pop Gillespie. And with that in mind, I think about all of the different food items and try to come up with story titles which I think are either topical, interesting or, hopefully, both.

Let’s take Christmas. Mince pies are a staple Christmas food item. Simply switch the word, pie to spy and you’ve a living, breathing food sapiens creature which you can take on a creative journey. Or in my case, straight into a fan oven where the poor little blighter is horrifically murdered.

And once I have a title, then I will work out a story from there. Although I know that I am writing about a surreal world with food sapiens and homo sapiens, I do want the world they live in to be recognisable. And so I would take events from real-life, give them a twist, and put them into my food related crime world. For example, we’ve not been able to get away from the EU referendum and Brexit since the summer, so why not give that a twist when writing a festive story and allow turkeys the vote on Christmas?

But before I begin writing, I like to know how the story is going to end. So I start with a title, think about what the story might look like and then figure out the ending. I also find that writing the ending first, which might be a little odd, helps me. I know where I need the story to go and that helps to focus my writing. And so once I have the ending written I go right back to the beginning and start writing in a more traditional front to back style.

I try to find humour in most situations and I hope that comes through in the stories that I have written so far. I certainly would hope that any reader of Addicted to Death or Who Killed the Mince Spy? can pick up either of the two books, forget about any real life troubles they may have and temporarily at least, slip into a world of silliness and surrealism.

My verdict on Who Killed The Mince Spy?

Along with the Food Related Crime Team; Dorothy, Oranges and Lemons, Carrot Detective Inspector Willie Wortell is leading the investigation into the murder of Mitchell the Mince Spy who has been found dead in a fan oven.

Not only do they have no leads as to who this murder victim is, there is also a strange man with a white beard hanging around. Plus the turkeys are voting on whether to abolish the traditional Christmas roast (very topical considering the recent referendum.)

I have not read Matthew’s previous short story so the only introduction I had to this book was that it was ‘a food related crime investigation.’ It did really sound intriguing. The story starts off with a murder of a mince-pie. Yes, a mince-pie.

The jist is that humans still exist but food has developed and evolved to live like humans and we all cohabitate and work together.
Detective Wortell and his team are called in to work out who has committed this crime.

This story didn’t take me long to read. It’s only 132 pages long. It’s perfect if you are looking for something short with a festive theme to go with the time of year.

It’s fun and quirky and reminded me a lot of All My Friends Are Superheroes. It’s got that kind of a feel to it. There are some very funny 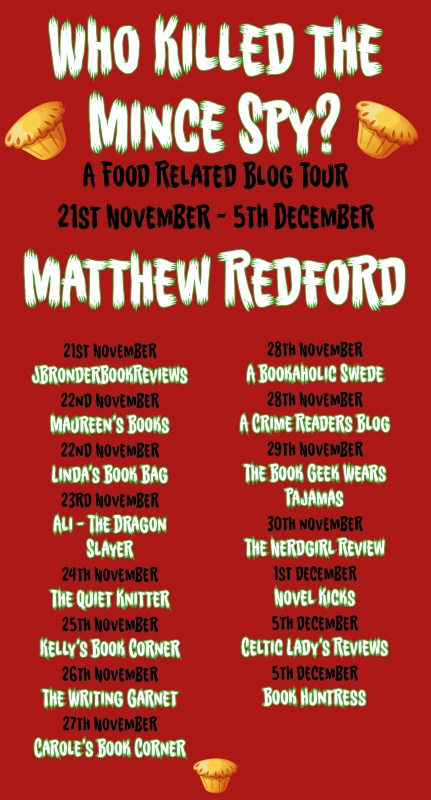 moments and lines throughout the book (which had me laughing out loud.) There are also food puns, a TV presenter called Paxo and some amusing acronyms too.

The turkeys have been granted a referendum as to whether to abolish the traditional Christmas roast which did actually have me debating that argument to myself.

Overall, this is a funny, festive short story and if you’re looking for something fairly short to read over Christmas and or are a bit of a foodie, this book would be perfect.

estate in Bermondsey, south-east London. He now lives in Longfield, Kent, takes masochistic pleasure in watching his favourite football team snatch defeat from the jaws of victory, is a keen chess player and is planning future food related crime novels. To counterbalance the quirkiness of his crime fiction Redford is an accountant. His unconventional debut crime thriller, Addicted to Death: A Food Related Crime