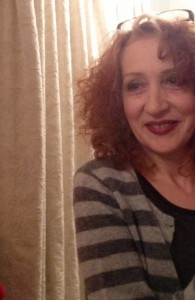 We are very happy to be part of the blog tour for Polly James and her debut novel, Diary of an UnSmug Married.

We had a chat with Polly to ask about her book, her ideal dinner guests and who she would like to swap places with for a day…

I can’t recall who it was who told me to read everything I write out loud, but it’s definitely the most useful advice they could ever have given me. It’s so much easier to tell if your dialogue sounds natural or whether something makes sense if you say it aloud, and it helps with comic timing, too.

I write a lot of dialogue, as I think it’s one of the best ways to help the reader get to know the characters you’ve created, and Diary of an Unsmug Married is written in the first person, so it was particularly important that Molly (who’s the main character) should have a distinctive and believable voice – because she’s the one telling everyone else’s story, as well as her own.

I found it much easier to decide if something I’d written sounded like something she would actually say when I read it out loud, and I think doing that is what helped me to bring her alive – or that’s what I hope readers of Molly’s story will think, anyway!

Who are your ideal dinner guests?

I forgot to ask whether I have to choose real people as guests, so I’m going to assume I don’t, if that’s okay with you. (It’s a much safer option, as it limits the number of living people who might get food poisoning.)

Both real and fictional guests will need a sense of humour to deal with the inevitable culinary disaster that I’m bound to achieve, anyway, and it would be a bonus if some of them could cook, as well. (If they could take over and produce a decent meal when it becomes obvious that I’m incapable of doing so, that would be extremely useful.)

They’ll also need to be great conversationalists, to distract attention from what I’m bound to end up looking like after spending several hair-raising hours in the kitchen, only to then forget to take the food out of the oven until reminded to do so by the arrival of the fire brigade.

Now I’ve narrowed down the field so nicely, it’s a doddle to choose who I’d put on my list: eight people guaranteed to make me laugh:

Karl Pilkington, moaner and philosopher (“The Elephant Man would never have gotten up and gone,“Oh God. Look at me hair today.”)

Fran Lebowitz, writer. (“Ask your child what he wants for dinner only if he is buying.”)

Paul Merton, comedian (“My school days were the happiest days of my life; which should give you some idea of the misery I’ve endured over the past twenty-five years.”

Niles and Frasier Crane from Frasier, psychiatrists. (“Frasier, I need to ask a small favor. I need you to create a distraction while I have a sex change and move to Europe.”)

Nora Ephron, writer (“ When your children are teenagers, it’s important to have a dog so that someone in the house is happy to see you.”)

Stephen Wright, comedian. (“If at first you don’t succeed, destroy all evidence that you tried.”)

Sue Townsend, writer. (Writing as Adrian Mole: “Now I know I am an intellectual. I saw Malcolm Muggeridge on the television last night, and I understood nearly every word. It all adds up. A bad home, poor diet, not liking punk. I think I will join the library and see what happens.”)

Clive James, writer and critic. (Writing about Formula One commentator, Murray Walker: “Even in moments of tranquillity, Murray Walker sounds like a man whose trousers are on fire”.)

What is Diary of an Unsmug Married about?

It’s the story of Molly Bennett, and begins when Molly’s about to “celebrate” what everyone else will insist on referring to as her “big” birthday. She can’t see what there is to celebrate, as she’s worried she’s doomed to spend the rest of her life deteriorating in front of the TV, measuring her decline by the increase in the number of chin hairs reflected in her 25x magnifying mirror – unless something exciting happens to her soon. She doesn’t rate the odds of this as particularly favourable.

Molly would also rather like to have sex with husband Max more than twice a year – but the chances of that don’t seem particularly favourable either. He seems to be going through a mid-life crisis of his own, which is demonstrated by his inability to recall important details, like where he’s been when he’s late home from work.

This could have something to do with Molly’s neighbour, Annoying Ellen, but Molly’s far too busy to find out. Most of her time is spent dealing with the crazed sibling rivalry of her two teenage children, and the antics of a large posse of parents and step-parents (including a father who always seems to be up to something).

As if that wasn’t bad enough, Molly also has to contend with her boss, an unpredictable backbench MP – and not in the glamorous surroundings of Westminster, but in the backwater of his constituency instead. This means much of her working life involves dealing with “nutters” (to use one of colleague Greg’s somewhat politically incorrect turns of phrase), but although Molly may want things to change, you should always be careful what you wish for – because you just might get it…via Facebook, in the form of a man called Johnny Hunter.

Is there someone you’d like to swap places with for a day?

My first thought was someone glamorous and famous, but then I thought it’d be far too depressing to have to look at the real me in the mirror on the following day – and, anyway, I’ve had a much better idea now: I’d swap places with my husband.

Imagine being able to do that for a day! It would be amazing to see what it was like being married to yourself, and whether you were as easy to live with as you always claim you are. And it would help you understand your husband or wife’s point of view better, too – wouldn’t it?

I’d be quite tempted to change places with one or both of my kids as well, if I could have a second go: if only to see whether I’m actually half as bad a mother as I sometimes feel I am (or as they’ve been known to claim I am – usually while being told off).

Which book, out of all the ones you’ve read, is your favourite?

Gosh, that’s an impossible question – there are so many books I love, and the one I like best often depends on my mood, so I was tempted to cheat and choose a few. Even if I did, though, I’d still find it a challenge, as I love reading so much and always have, so I’d probably end up producing a list containing hundreds of books!

I am reading a wonderful book at the moment, though, so maybe I’ll just opt for that. It’s The Goldfinch, by Donna Tartt, and tells the story of a young boy called Theo Decker, whose mother is killed in a disaster that Theo’s caught up in, too. He manages to escape, but is left in possession of something that goes on to take control of his life: a small painting of a goldfinch.

The plot might not sound like a laugh a minute – and it isn’t, if I’m honest – but that doesn’t matter at all, because the novel’s so beautifully written and has some of the most believable characters I’ve ever encountered in a work of fiction.

The descriptions of places are incredibly good, too, and you can feel the sun beating down on you when Theo’s in Las Vegas, or the chill in the air when he’s in New York. Everything in the novel comes alive in the most vivid way possible. (I don’t recommend reading the first chapter before bed, though – I had one of the most realistic and frightening dreams ever, after doing that!)

Anyway, as you can probably tell, I’m loving this book so far, though I’m only half-way through it because I’m deliberately reading it very slowly, so as to savour every word. My only reservation is that reading it makes me so jealous of how well Donna Tartt writes, that I then I have to go and read something funny to cheer me up. (For that, I usually pick either the diaries of Adrian Mole or Bridget Jones, or On Television, by Clive James. His television criticism always has the power to make me snort and choke with laughter in public, which may or may not be a good thing, depending on whether you’re in the same vicinity.)

To read more about Molly, visit her blog.

Diary of an UnSmug Married is available to buy in paperback and e-book.

Tomorrow, the blog tour stops by Books with Wine and Chocolate.