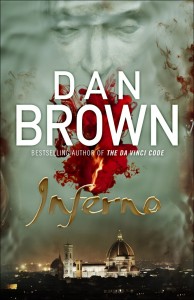 ‘Seek and ye shall find.’

With these words echoing in his head, eminent Harvard symbologist Robert Langdon awakes in a hospital bed with no recollection of where he is or how he got there. Nor can he explain the origin of the macabre object that is found hidden in his belongings.

A threat to his life will propel him and a young doctor, Sienna Brooks, into a breakneck chase across the city of Florence. Only Langdon’s knowledge of hidden passageways and ancient secrets that lie behind its historic facade can save them from the clutches of their unknown pursuers.

With only a few lines from Dante’s dark and epic masterpiece, The Inferno, to guide them, they must decipher a sequence of codes buried deep within some of the most celebrated artefacts of the Renaissance – sculptures, paintings, buildings – to find the answers to a puzzle which may, or may not, help them save the world from a terrifying threat.

Dan Brown’s books are not everyone’s cup of tea. They are a guilty pleasure of mine.

I loved The Da Vinci Code and Angels and Demons. Mystery and puzzles interest me and so, when I read those I sped through them without wanting to put them down. I wasn’t as keen on The Lost Symbol – it was a little slow in places. So, even though I was excited to read Inferno, I was a little wary too.

It started off well and went straight into the action and mystery – enough to keep me reading and turning the page, (even though the chapter/character jumping frustrates me.)

There were a couple of places where I was over bombarded with facts which confused me a little but overall it was easy enough to follow. The only other thing I struggled with was, as with The Lost Symbol, it was a little long and rambling in parts.

There were enough twists and turns which kept me guessing and I didn’t see one particular twist coming which was a nice surprise.

Overall, Inferno was OK. It wasn’t one of Brown’s best books but it was entertaining. It’s not the one I’d start with though if you’re new to the Langdon series.