To Catch A Creeper by Ellie Campbell 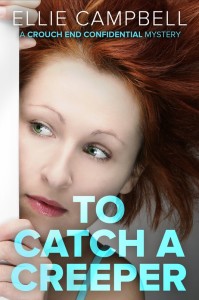 Cathy is riding high in her brand-new job at a (surprisingly bitchy) top London advertising agency working with best friend Rosa. But when Rosa’s pregnancy goes amiss and enemies sabotage her new career, she finds herself leading a chaotic double life of lies and deception, hiding a shameful secret from all, especially husband Declan who appears in the throes of a nervous breakdown. Meanwhile she’s agreed to unmask the notorious Crouch End Creeper, a burglar terrorizing their neighbourhood. Little does she know that her meddling, assisted by fellow mothers (the Wednesday Once Weeklies) and the Neighbourhood Watch, will lead their dangerous opponent to murder. And that it’s not only the tall elegant transvestite who is placing herself at risk…

I was attracted to this novel for totally the wrong reasons – it’s set in Crouch End, which is an area of London I love, and I’ve got a friend who lives there; and there’s a red-head on the cover – I’m a red-head and feel a pull towards others. Whatever the reason, I’m glad I was.

It’s a very light, easy read, exactly what I needed after a couple of ‘deep’ books I’d read just before. It was gripping though; I read it quickly, over a weekend.

It seemed like the first quarter was setting the scene, it took a while for the story to really get going – but it didn’t feel like a problem. It’s written very colloquially, as if the reader is another one of the WOWs (‘Wednesday Once Weeklies’ – Cathy’s group of friends), and I found myself wanting to be. Cathy’s a mother, got a job and a social life – all of which I hope to have at the same time one day – and they all live in Crouch End, which is really cool.

It’s not the usual kind of crime book I’d read (I’m a massive Linwood Barclay and Nicci French fan) but I really enjoyed it. Is there a women’s fiction/thriller genre? I’d put it there, it’s almost more women’s fiction than thriller – in my mind.

This is the second in the series, and I hadn’t read the first. It didn’t really matter, but I’ll definitely go back and read the first, Looking for La La, even though I know some of the things which happened. I’ll also be looking for Campbell’s other books.

Ellie Campbell is the pseudonym for two sisters writing together (much like Nicci French, which is a couple writing together). This impresses me so much. It’s so hard to write, but trying to write with someone else, and keep it flowing, so the reader doesn’t notice? That’s impressive.

3 Responses to To Catch A Creeper by Ellie Campbell