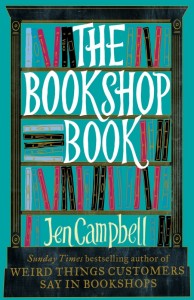 The Bookshop Book looks at over 300 bookshops across six continents, so sadly I didn’t get to visit them all – though I spoke to people who had. I got to most of the bookshops in the UK, Paris, Berlin and Amsterdam (where I lived on a houseboat for a few days). When I was writing the book, I’d get up early and Skype with booksellers in Asia (like Ayuko, who runs a sushi-making class inside a bookshop), and Australia/NZ; then I’d go to work in my own bookshop, before skyping with booksellers in North America in the evening. So, I felt as though I was living in several different time zones – it was a bizarre, but wonderful, time.

If you could time travel, where would you go and why?

I try not to have them, because I think if you’re too rigid about it then you make excuses not to write. However, I like to write in an environment that’s as quiet as possible, though if it’s poetry I’m writing then I like to have music on in the background – normally Dustin O’Halloran.

Out of all the books you’ve read which three have made the most impact on you?

Oh, this is a tough one! Erm… Through the Looking Glass – Lewis Carroll; Oranges Are Not The Only Fruit – Jeanette Winterson; His Dark Materials – Philip Pullman.

Where’s your favourite place to write?

At the kitchen table, looking out at the garden.

Shakespeare and Marlowe (to get all the gossip on Elizabethan theatre). 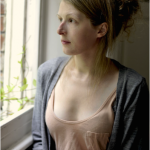 About Jen: Jen grew up in a small village by the sea in the north-east of England. After studying English Literature at Edinburgh University, she moved to north London to sell books and write stories. She works part-time at an antiquarian bookshop.  Jen’s first book, Weird Things Customers Say in Bookshops, was published in 2012 and was a Sunday Times Bestseller. The sequel, More Weird Things Customers Say in Bookshops, was released in 2013. ‘Weird Things…’ is available in nine languages, and was a finalist in the Goodreads Choice Awards. Her new non-fiction book The Bookshop Book was published in October by Constable/Little, Brown, and is the official book of the 2014 Books Are My Bag campaign. For more information on Jen, visit her website: http://www.jen-campbell.co.uk/ You can also follow her on Twitter: https://twitter.com/aeroplanegirl Jen is also on You Tube: https://www.youtube.com/user/jenvcampbell To find out more about the Books are my Bag campaign, visit: http://www.booksaremybag.com/