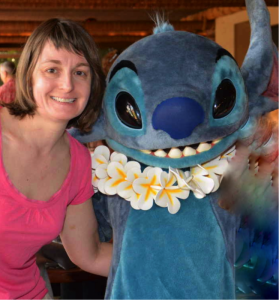 Could there be a better place on the planet for an excitable individual like me than Walt Disney World Florida? If there is I haven’t discovered it yet.

I have more bounce than Tigger, more manic a laugh than Stitch and I’m more playful than Pluto! So to be lucky enough to be able to go with my family to Disney World meant that I fitted right in and could skip around the Magic Kingdom without anyone batting an eyelid. For the child, Disney is also an amazingly magical place – the stuff of dreams. She saw the characters she has grown to love and the stories she knows so well actually come to life in front of her. She could watch them on stage, experience their world through rides, meet them and have a photograph with them and best of all be able to give them a hug! This is the ultimate holiday for her.

For me this is what writing is like. I have these characters that appear in my mind and they act out their story. Getting it down on paper is the first step in bringing them to life, it makes them more real; with a backstory, a goal and a personality. Seeing them come to life on the page of an actual book and being able to talk about them with readers is very similar to a trip to Disney World.

Now that they have been let out and shared I can now talk with others about these people that I know really well but previously didn’t exist outside my head. I can discuss their world, what they are like as individuals and how the situations in the story impacted them. Sadly I can’t give them a hug (and there are a couple of heroes I would like to do that to!)

Every conversation with a reader is like a little step into your very own Disney World but it’s a whole lot cheaper!