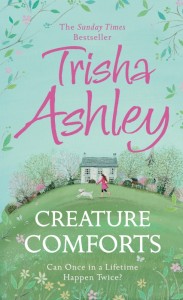 I am excited to be welcoming Trisha Ashley back to Novel Kicks. Her latest novel, Creature Comforts was released by Avon on 26th February and as part of the blog tour for the book, Trisha and Avon have shared an extract with us. Enjoy.

When we first met, it felt so right that I thought falling in love with him must be part of my preordained destiny. Even though my best friends, Lulu and Cameron, teased me about my conviction that I had a near-death experience and went to Heaven while I was in a coma after the accident, and was sent back only because I had some important purpose to perform in life, I knew it was real. Since then I just had to tune inwards to the voice of my guardian angel from time to time to check I’d taken the right turning … only with Kieran, I think I must have fallen for him so hard that I misread the message.

My path through life had appeared clearly marked till then, for after studying Textiles and Design, I’d accepted a job with the Women’s World Workshops Foundation, which sent me on assignments all over the world, though the majority were in India. The pay was minimal, but the job satisfaction immense: discovering the skills and artistic heritage of each area and finding ways of utilising them in the making of beautiful garments, the sale of which could transform the lives of the local women involved in the scheme and, through them, those of their families and even their whole communities.

And all the time I was amassing a huge portfolio of colours, designs, patterns, ideas and contacts, ready for the day when I would finally go home for good to Halfhidden, the small village in west Lancashire where I grew up, and set up my own business selling retro-inspired clothes.

Yes, the way forward had unrolled in front of me like an inviting magic carpet … until I literally bumped into Kieran in Pakistan, where he was working as a doctor for a medical charity and I was helping some enterprising local women to set up a co-operative making woven jackets.

It seemed like sheer serendipity that we should have been in the same place at the same time … though not so serendipitous afterwards, since we rarely managed more than snatched days together whenever we could make our leaves coincide.

Perhaps if we’d spent more time in each other’s company, we wouldn’t still have been engaged.

I’d always believed that Kieran was a wonderful doctor who loved his work as much as I loved mine – it was just that until a few months before, he hadn’t mentioned that he’d always intended joining his family’s GP practice in Oxford. When I discovered this, he’d suggested that I could just as easily set up my business there as anywhere else.

But although Oxford was a lovely city, it wasn’t my city. I’m a country girl, used to living on the edge of moorland, a short drive from endless expanses of beaches, not a hemmed-in-by-dreaming-spires one.

And then, Kieran’s parents were a bit of a shock, too. Miranda, his overbearing mother, and Douglas, his sarcastic, know-it-all father, not only assumed I’d fall in with Kieran’s plans, but had already started to look for a house for us. Miranda was even trying to take charge of my wedding, checking out reception venues at stately homes within easy reach of Oxford. That was the last straw.

‘I think you’re being very ungrateful, when my mother’s taking all this trouble,’ Kieran had said, when I’d rung him, furious. Then he’d added that since I was always banging on about my destiny, I should realise that joining his parents’ GP practice was his.

We’d had so many arguments recently and that last one had reached a sort of crisis point, so that although I intended going straight from the airport to Oxford, as we’d arranged, I resolved that when Kieran arrived the following day the discussion was not going to go the way he so clearly expected it to.

Suddenly my inner voice was telling me, loud and clear, to go home to Halfhidden and that I was needed there – not only by Aunt Debo, but also by my friend Lulu.

The tour continues tomorrow over at http://spoonfulofhappyendings.blogspot.co.uk

Creature Comforts was released by Avon on 26th February 2015 and is available at most major bookshops. Click here to view at http://www.amazon.co.uk. 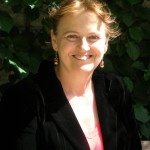 Trisha Ashley writes romantic comedies. She is from St Helens in West Lancashire, and believes that her typically dark Lancashire sense of humour in adversity, crossed with a good dose of Celtic creativity from her Welsh grandmother, have made her what she is today…whatever that is. Five of her novels are set in rural West Lancashire and three in Wales. They frequently explore aspects of the three F’s that are a constant in her own life: Food, Flowers and Friendship and include delicious recipes at the back.
Nowadays she lives in North Wales, together with the neurotic Border Collie foisted onto her by her son, and a very chancy Muse.
She is the founder member of NW Novelistas Ink, a group of twelve novelists, several of whom are bestselling, who meet regularly in North Wales; she is also a long term member of the Society of Authors and a member of Literature Wales.
Trisha has a website at www.trishaashley.com where you can find out more about her, sign up for her newsletter, or see a complete list of her books. You will also find her on twitter as @trishaashley.