Blog Tour: If I Only Had A Duke by Lenora Bell – Author Interview and Book Review 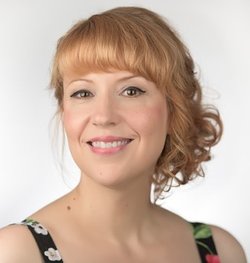 I’m very happy to be welcoming Lenora Bell to Novel Kicks today and her blog tour for the latest novel in the Disgraceful Duke series, If I Only Had a Duke which is due to be released by Piatkus on 30th August 2016.

After four failed seasons and a disastrous jilting, Lady Dorothea Beaumont has had more than enough of her family’s scheming. She won’t domesticate a duke, entangle an earl or vie for a viscount. She will quietly exit to her aunt’s Irish estate for a life of blissful freedom. Until an arrogant, sinfully handsome duke singles her out for a waltz, making Thea the most popular belle of the season.

Well, the duke ruined her plans and now he’ll just have to fix them.

Dalton, Duke of Osborne, is far too heartless for debutantes or marriage – he uses dalliances to distract from his real purpose: finding the man who destroyed his family. When his search leads to Ireland, the last thing he needs is the determined, achingly innocent Thea, who arrives in the dead of night demanding he escort her to her aunt. His foolish agreement may prove his undoing. The road to the Emerald Isle is fraught with unforeseen dangers, but the greatest peril of all might just be discovering that he has a heart . . . and he’s losing it to Thea.

I’ve reviewed the book below but first, I’ve had a chat with Lenora. Hi Lenora, thank you so much for joining me today. First, can you tell me a little about your typical writing day and how many words you aim to write on a daily basis.

Hi Laura! Thanks for having me here at Novel Kicks! I see you have a cat named Buddy. Every writer should have a cat, don’t you think? They’re such good companions for long writing sessions. They just curl up and sleep to the sound of your clicking fingers on the keyboard as if it were rain pattering on a tin roof. (Yes, Lenora, I totally agree!)

Writing for me is both agony and ecstasy. There is a certain amount of slogging through the trenches that needs to happen before the words on the page learn to fly. A typical writing day for me means churning out extremely rough stream-of-consciousness pages and then spending three times as many hours trying to wrestle those rough pages into something fit to be seen by other eyes. I may have ten rough pages and only produce one edited page *sigh*. But when things go right there truly is no better feeling.

Do you have any writing rituals (plenty of coffee, writing in silence etc?)

Coffee, of course! Absolutely necessary for those late night writing binges. I find what helps me the most to focus on the emotional heart of scenes is to do some yoga and light a candle before I write, and then stop every hour or so and take a quick yoga break. It helps me focus as well as helps stretch all those cramped writing muscles.

Your new book, If I Only Had a Duke is the second in the Disgraceful Duke series. Can you tell me about it?

I’m so excited about this book! It’s the second in the Disgraceful Dukes series and is loosely inspired by the Wizard of Oz. If you read it with that in mind you’ll find subtle references throughout the novel. This is the story of Lady Dorothea Beaumont, who’s had more than enough of her family’s scheming and just wants to escape from London and live a quiet life as a spinster, and Dalton, Duke of Osborne, who uses public spectacle to distract from his true purpose—finding the man who destroyed his family.

How did you approach writing this novel in terms of planning and research?

I worked closely with my fabulous editor at Avon Books, Amanda Bergeron, on planning and plotting. Sometimes my plots tend to wander and she always reined me in and redirected me to the heart of the story. As for research, I read books and watched videos on everything from Regency-era traveling coaches, ships, and gaming hells to etiquette and recipes for trifle. It was tons of fun!

Mr. Darcy. In a wet shirt. Climbing out of a lake to sweep me off my feet.

If you were told you could only own three books which three would you pick and why?

Wow that’s a great question! And a truly difficult one. You’re really going to make me choose three? Only three? Of course I’d have to take Pride and Prejudice because I can’t live without it. Jane Eyre would be next. And then I’d really have to think long and hard about whether to take a Margaret Atwood or an A.S. Byatt—I love them both and reread their books religiously.

If you needed to escape where would you go and what would you do?

When I need to escape from the hectic pace of large cities or the demands of work I go to my small hometown in Alaska. Believe it or not, everyone still leaves doors and cars unlocked there. It’s so incredibly peaceful and quiet. In summer there’s no prettier place in the world. Majestic snow-capped mountains, flaming purple fireweed, and wide blue ocean.

Follow your passion and don’t let anyone tell you no – especially yourself! I dedicated If I Only Had a Duke “To all the girls who doubt themselves. Let your light shine” and I truly mean that. Believe in yourself. Pursue your dreams right now because life is short.

I also tell new writers (and I count myself among those) to read widely in their genre and really think about how the author made you feel a certain way. How did Eloisa James make me fall in love with Vander in Four Nights With the Duke? Pick one of your favorite books apart, chapter by chapter, even scene by scene, and ask yourself why it made you sigh with pleasure, laugh, and cry. 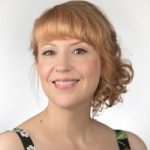 Lenora Bell is a third generation Alaskan and her hometown still has no traffic lights or fast food, but the public library is going strong!

An English teacher with an MFA in Creative Writing, Lenora has traveled the globe using music to bring smiles to classrooms. She currently lives in Switzerland with her carpenter husband and two naughty tiger-striped kitties named Dorian Gray and Percy Shelley.

In 2014 she won the Romance Writers of America’s Golden Heart Award for Best Historical. She’s thrilled to be debuting with Avon Books in 2016! 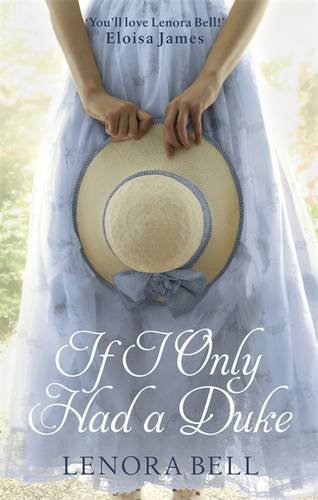 My verdict on If I Only Had a Duke:

Lady Dorothea Beaumont is tired of her family’s scheming. After four failed seasons, Thea would much rather remain unmarried and living with an aunt in Ireland than forced into marriage to an earl, duke or viscount whom she doesn’t love and won’t love her back.

When Thea’s plans to just get through one more season without a proposal so she can return to Ireland get disrupted because an arrogant duke asks her to waltz with him, she vows that he will be the one to fix it.

Meet Dalton, the Duke of Osborne. He uses his reputation as a playboy to distract people from his real life purpose, which is revenge for his family. When his search leads him toward Ireland, he doesn’t count on having Thea in tow.

Thea is a force to be reckoned with. She is not your normal damsel in distress. She can very much take care of herself. She is a strong female character and I liked her very much.

Dalton is a bit of a brooding hero but he is a complicated character. He is dealing with a lot of demons from his past. He is seen as a playboy but Thea sees more to him once she has a chance to see through his façade.

I raced through this novel. I couldn’t quite work out how this was going to end. It kept me guessing and when it did end, I wanted to read more.

There is such an ease to the writing style that I loved. I’ve not read a lot of historical romance (which is strange considering how much I love history and romance,) but I really did like this book. Although it is the second novel in the disgraceful dukes series, you can read this one prior to reading How The Duke was Won (although I will be reading this at some point.)

I have fast become a fan of Lenora’s books and I look forward to book three.