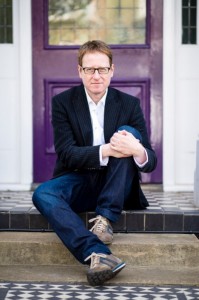 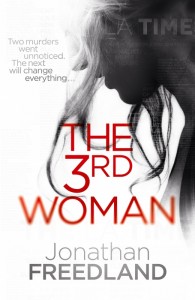 But she could not quite shake off Quincy’s words. You don’t always know everything. Quincy had insisted that Abigail did not do anything so ‘urban’ as drugs, but that did not exclude the possibility that she was daring in other ways. Did Abigail have a dark side hidden only from her, but known to the others? Maddy had always imagined it was only she who had sexual secrets, who had made countless bad choices. She had always assumed that Abigail was as wholesome as Quincy was straitlaced. But maybe she was wrong. And how to explain the high-end clothing she had seen in the closet, each item far beyond the reach of an elementary school teacher’s budget?

Her phone vibrated. She glanced down: Detective Jeff Howe again. High probability that he was merely ‘checking in’ – his phrase – making sure she was OK, even though next to no time had passed since he had last been here. But there was a chance he was calling for the reason she had asked: to convey information. She pressed the green button.

‘Yes,’ she replied, hoping her terseness sounded sad rather than impatient, even though the latter was the truth.

‘Not the whole thing. Only a summary, by the looks of things. But I’ve got the concluding section.’

‘There were signs of pressure on the neck, suggestive of a chokehold. And indications that she was held, with some force, by her head, around the temples. Probably from behind.’

The thought of it, the picture of it that materialized instantly, made her unsteady. A kind of queasiness rose through her, as if she were dizzy. To visualize with great clarity her sister grabbed and held by a stranger, the fear that she knew would have consumed Abigail at that moment, the word chokehold – all of it made Madison nauseous. The sensation was physical.

But she forced the sickness away, as if she were pushing bile back down her throat. She would force herself to think, not to feel, to process what she had just heard the way she imagined Barbara Miller and Howe’s fellow cops would: as information. As data: nothing more, nothing less. Judged like that, as the detectives would judge it, she told herself these latest findings were interesting and useful, but hardly destruc­tive of the police’s rough sex hypothesis. That Abigail had been nearly strangled did not mean she had been nearly strangled by a stranger. If anything, this evidence could be held to strengthen the LAPD’s working theory of the case, confirming that the rough sex was really rough. Madison said nothing of this. Only, ‘What else?’

‘No needle retrieved from the scene.’

‘Jeff, don’t spare me because you think I can’t handle it. I can—’

‘I’m not sparing you. I told you, I haven’t seen the complete report.’

‘No needle. And just one needle mark. No others.’

‘Which confirms Abigail was no junkie,’ Madison said, irritated by the betraying quaver of her voice.

‘Actually,’ Jeff replied, ‘there’s a note on that. Saying needle marks can often close up within weeks.’

‘For God’s sake, Jeff, Abigail was not a drug user.’

‘I didn’t write this report, Madison. I’m just the jerk risking his job to tell you what it says.’

‘You’re right. I’m sorry.’ She swallowed, girding herself for the next and obvious question. ‘Jeff, I have to ask.’

She closed her eyes, bracing herself for what she would have to say as much as for what she might have to hear. She sought to smother her inquiry in the language of forensics, as if that might take the edge off. ‘Was there any sign of sexual contact? Any . . . exchange of bodily fluids? Anything like that?’ Her voice petered out.

The policeman answered quickly. ‘No sign at all, Madison. None.’

Madison thanked Jeff again – aware of the obligation that was building between them – and hung up. Only then did she let out a long, deep exhalation, one she had not wanted him to hear. Thank God for that. For that small mercy at least, thank God. Whatever hell Abigail had endured, she had not been raped. In that instant when Jeff first told her Abigail had been found dead, that had been Madison’s starting assumption.

But that only made the horror more baffling. At least a sex crime had an obvious, if grotesque, motive. But how was she to make sense of Abigail’s death now? Perhaps the LAPD would cling to its sex-game theory all the same, but it struck Madison as a strange kind of sex that involved no contact. No, she was certain. This was no accident. It was murder. But the question remained, sharper now than ever: why would anyone want to kill her sister?

Our verdict on The 3rd Woman…

This book is fully typical for this genre. You know that the characters and plot set up at the beginning of the novel aren’t going to fully be what they seem. What sets this book apart however, in my opinion was its setting. It is set in a world where China has called in its loans to the US and as a result, there is now a large Chinese presence in the string of pearls ports (San Francisco, Los Angeles etc.) This added a new, original dynamic to the genre.

The style of writing is good and it drew me in. The plot was well paced and there were no slow bits of the book. The sentences were of a decent length (short sentences are a pet peeve,) and the chapters are a decent length. This book was easy to read.

Most of the characters, to be honest were fairly average but the main character, Madison, was very well written and developed. I got a very vivid picture of her. I very much wanted her to succeed and there were definitely aspects of her personality I empathised with.

This is my first novel by Jonathan Freedland. I very much enjoyed it and I look forward to reading more novels from this author.

The 3rd Woman is published by HarperCollins on 2nd July and is available for pre-order. Click on the link to view on Amazon UK.  The next stop on the tour is at Northern Crime. Also join the conversation on Twitter: #The3rdWoman. 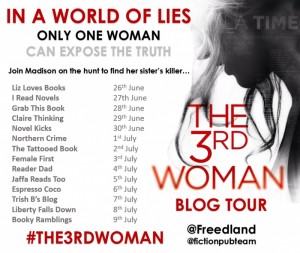 You can find out more about Jonathan at his website: http://www.jonathanfreedland.com

One Response to Blog Tour: The 3rd Woman by Jonathan Freedland