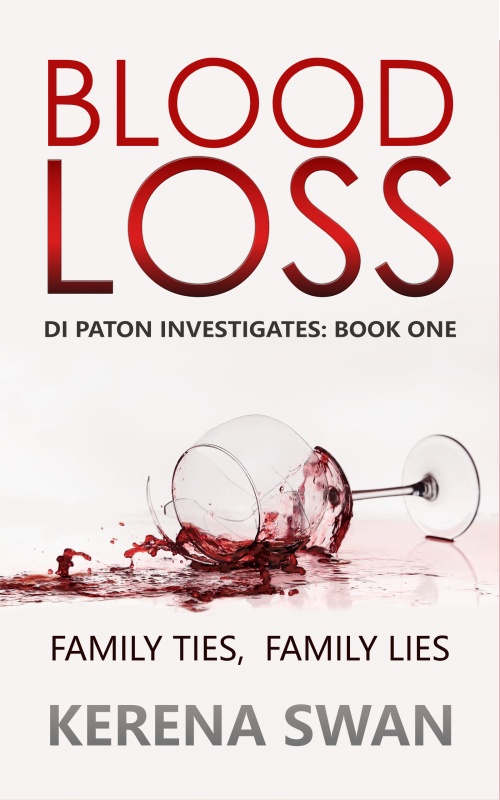 A big hello to Kerena Swan. She’s here with the blog tour for her novel, Blood Loss.

With one eye on the rear view mirror and the other on the road ahead, Sarah is desperate to get as far away from the remote Scottish cabin as she can without attracting attention. But being inconspicuous isn’t easy with a black eye and clothes soaked in blood…

… and now the fuel tank is empty.

When a body is discovered in a remote cabin in Scotland, DI Paton feels a pang of guilt as he wonders if this is the career break he has been waiting for. But the victim is unidentifiable and the killer has left few clues.

With the death of her father and her mother’s failing health, Jenna accepts her future plans must change but nothing can prepare her for the trauma yet to come.

Fleeing south to rebuild her life Sarah uncovers long-hidden family secrets. Determined to get back what she believes is rightfully hers, Sarah thinks her future looks brighter. But Paton is still pursuing her…

… and he’s getting closer.

Kerena Swan’s brilliant novel explores how honest mistakes and human frailty can have terrifying and long-reaching consequences. It’s a tale of family ties and loyalty, revenge and redemption that you won’t want to put down.

(CW: May be unsuitable for young children/scenes relating to a body.)

I was inspired to write this novel after reading a news article about people who undertook DNA tests to find out more about their heritage with shocking results.

Blood Loss is book one in a series featuring DI Paton and his son Tommy, a boy with Down’ Syndrome. After writing Who’s There? I was asked many times to write a sequel with the main character, Arnold. Tommy is a reincarnation of Arnold with a few subtle differences. You can discover the characters in a free novella available on my website. www.kerenaswan.com

Blue police tape fluttered across a rutted road to the right and three people, hunched in thick coats, stamped their feet nearby. ‘Bloody press,’ Paton muttered. ‘Come to feast while the body’s still warm. Who tipped them off?’

They rushed forward as Paton and Cheryl walked towards the police officer guarding the outer cordon.

‘Can you tell us what happened?’ a man asked, a watery drip wobbling under his red nose.  He grabbed a tissue from his pocket and rubbed it away.

‘Do we know who the victim is?’ A woman in a fur-trimmed hood stood in front of Paton, notebook at the ready, her fingers blue with cold.

‘You probably know more than me at this stage. Excuse me,’ Paton said. Stepping around her, he strode away with Cheryl following.

They gave their names to the officer who wrote them in the crime scene log. Behind him a man in a white suit was taking photographs of the mud and stones, swearing as the snow obliterated his evidence.

‘You need to get suited and booted, and take a spare pair of shoe covers for indoors,’ the officer said, running a finger around his collar and hunching his shoulders as large snowflakes melted against his neck. ‘Are you both on the fingerprint and DNA databases?’

‘When you’re ready, follow the path marked out by the tape.’

Paton was puffing by the time they reached the cabin at the top of the hill.

‘Maybe you should join my gym,’ Cheryl said.

‘I’m too old for all that nonsense. Besides, I do get exercise,’ he said.

‘Bowling with Tommy,’ he said, with a grin. 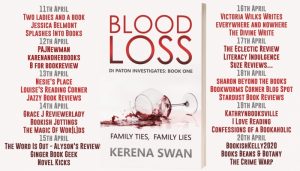 As they crested the hill the log cabin came into view, nestled between tall conifers. It was constructed of what appeared to be whole pine trees stacked on top of each other, the corners overlapping and sticking out like a giant game of Jenga. A porch ran across the front, the entrance barred with yellow Crime Scene – Do Not Enter tape. Paton looked around at the wide lawns and spiky shrubs. There were no other properties in sight. Just hills, trees and a distant view of the loch.

He ducked under the tape and opened the door to the cabin. ‘Is it okay to come in?’

A short woman in white barrier clothing, with only her serious brown eyes visible above a face mask, nodded and beckoned them forward. A man in the same attire stood in the lounge writing notes on a clipboard.

‘I’m Yvonne, and Frank here is the pathologist,’ the woman said. ‘Please keep to the step plates. We can’t have footprints or blood spatter evidence being contaminated. The body’s in here.’

She led the way through the wooden-walled L-shaped room, across square metal stepping plates to a back bedroom.  Yellow markers were placed next to potential pieces of evidence – a bloodied tea towel, a mobile phone and a paperback novel. ‘Close the door behind you,’ Yvonne called over her shoulder as Cheryl followed them in. ‘We don’t want debris blowing in from outside.’

Paton braced himself to face the corpse. Despite having many years of service behind him, he’d seen few dead bodies in his career, one of the bonuses of working in such a rural area. He could never admit it, but they made him feel lightheaded and sick, like the time he’d found a dead fox in the woods when he was eight. He’d rolled it over with a stick and its glassy eyes had stared at him as maggots crawled from the gaping red hole in its stomach. Horrified, he’d thrown up, much to the amusement of his sister.  Unfortunately, he’d never grown out of feeling sick or faint at the sight of death and blood.

He trod carefully across the step plates to what must be the bedroom, and forced himself to look. This one tested his self-control and he swallowed excess saliva, briefly wondering how Cheryl was coping.

A man lay on his back on the floor, wide eyes suggesting surprise at what had happened. His left hand gripped a fistful of blue bedspread hanging off the bed, but his right hand clutched at a knife protruding from his chest as though trying to remove it. It was the blood, though, that made Paton’s stomach lurch ominously. There was so much of it. The man’s clothing was saturated and the floor to either side of him was covered in dark pools of thick liquid. It had dried around the edges but the middle had a shine to it. It was still wet and the smell was overpowering to Paton’s sensitive nose.

The Crime Scene Investigator was speaking but Paton struggled to hear her over the rushing in his ears.  Something about unexplained blood spatters and drips from a height.  She pointed at small, perfectly round drops of blood on the floor and was saying they were about to take samples to see if they were from a different source when Paton felt his stomach heave and the room sway. He needed fresh air.

He turned for the exit abruptly, and in his haste barged into Cheryl who stumbled off her step plate, her foot landing squarely on the blood drips the CSI officer had just pointed out. Paton heard a gasp and a profanity but didn’t wait to see what trouble he’d caused. He ran along the step plates and across the porch before putting his hands on his knees. He bent his head as low as he could and gulped down lungfuls of the cold afternoon air.

What a fool he’d made of himself. How could he face the team after this? They’d tease him mercilessly and make him buy the cakes for weeks as his punishment. He’d never live it down. 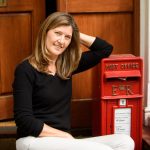 ​We are thrilled to be introducing DI Dave Paton and his son Tommy, the stars of the first novel in Kerena Swan’s new series, to the world.

Before coming to Hobeck, Kerena had published three novels, Dying To See You, Scared to Breathe and Who’s There? and has built a solid fan base around her writing career thus far.

She is a juggler extraordinaire: driving forward a successful care business she runs with her husband yet finding time to write. She loves to write, here and there and everywhere when she’s not working. We don’t know how she does it but we are glad that she does! Kerena talks about her writing, her influences and how she came to Hobeck in this video.

Click to view Blood Loss on Amazon UK (Blood Loss will be just  99p for a limited time only,) and Amazon US.