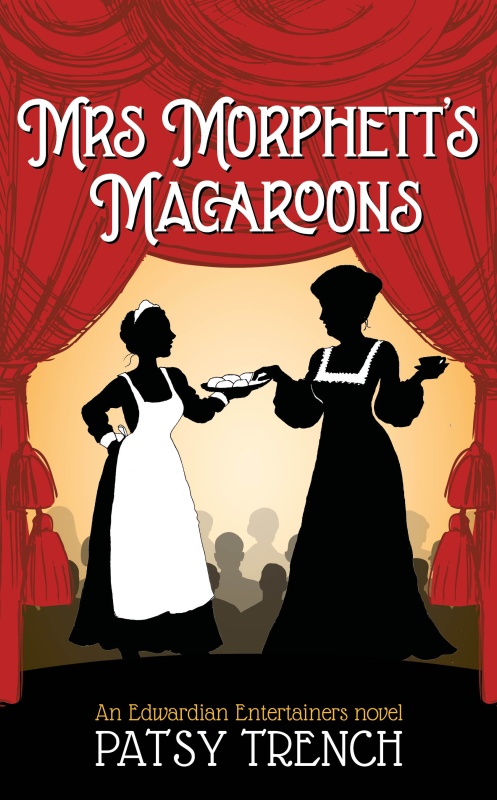 I am pleased to be welcoming Patsy Trench to Novel Kicks today along with the blog tour for her novel, Mrs Morphett’s Macaroons.

Is it Shakespeare? Is it Vaudeville?

Not quite. It is Mrs Morphett’s Macaroons, a satirical play about suffragettes which its creators – friends and would-be lovers Robbie Robinson and Violet Graham – are preparing to mount in London’s West End.

It is the play rival actresses Merry and Gaye would kill to be in, if only they hadn’t insulted the producer all those years ago.

For Robbie and Violet however the road to West End glory is not smooth. There are backers to be appeased, actors to be tamed and a theatre to be found; and in the midst of it all a budding romance that risks being undermined by professional differences.

Patsy has shared an extract with us today so enjoy!

It is 1905.  Mrs Santenoy is an elderly suffragist in the early days of the suffrage movement, before Mrs Pankhurst appeared on the scene and when the demand for votes for women were largely peaceful. The protest Mrs Santenoy took part in was perfectly orderly until the police moved in on horseback to disperse it, and a handful of the lady protesters were rounded up and sent to prison for two weeks.

When Mrs Santenoy arrived at Holloway Prison she was in a state of high excitement. For a woman from what society termed ‘a privileged background’, married for nearly forty years, the experience of going to prison was without question the most extraordinary event in the sixty-eight years of her life. Even as she was lined up against a wall with her fellow protestors and given a rudimentary medical examination, Mrs Santenoy still felt the strangest thrill of adventure. She saw herself as an actress in a play, going through the rudiments of being sent to prison without any idea of what lay ahead of her.

On instruction from the prison wardress she was made to undress – ‘Completely?’ – ‘Completely’ – and given some old, stained underclothing, brown woollen stockings and a green serge dress that really was stamped all over with broad arrows. She hunted for but did not find a matching pair of shoes to wear from a huge basket, after which, laden with sheets, a towel, a mug of water and a thick slice of rough bread she was shown to her cell. Even then it all felt quite unreal and startlingly melodramatic. She sank exhausted onto the hard wooden bed and closed her eyes and, surprisingly, slept.

The following day, having requested some reading matter she was given the Bible and an atlas of the world. She embarked on the first with interest and glanced through the second. During the obligatory hour’s exercise in the prison yard she kept her head held high and, as instructed, avoided contact with her fellow prisoners. She managed to keep this up for two whole days without too much pain.

It was around the third day that the excitement faded. It was not until then that she became fully aware of a kind of sour, stale odour seeping through the walls from centuries of poor ventilation and prevailing damp. Her cell was both stuffy and cold. She sensed the presence of something that moved and scuffled. She dare not leave what food she was given on the floor lest her fear of mice and rats became real.

In the exercise yard she observed her fellow detainees with dulled curiosity. Apart from the suffragettes, whom she recognised only vaguely by sight, the women kept their eyes on the ground, and she was struck by the thought that many if not most of them had possibly spent more of their lives in prison than out; that a good half of them were no more than girls, and that there was a kind of resigned doggedness to the way they walked, shoulders slumped, feet dragging, as if tramping mindlessly in a circle was all they knew how to do or would ever do in the future. There were very few outbreaks, or protests; they didn’t seem to have the energy.

Back in her cell, alone, Mrs Santenoy continued to wonder about them. How she would have loved to have heard their stories. In her long life she had rarely come across anyone from a background so different from hers, and now, tantalisingly, she was living right among them yet unable to communicate with them. Punishment for a crime committed, for whatever reason and under whatever circumstances, was a crime, in Mrs Santenoy’s view, and should be punished accordingly. But if prison did nothing to rehabilitate these women, these girls, what was the point of it? If all they did was to re-offend the moment they were set free only to find themselves back behind bars again, what sort of a life was that? The sadness of it, the waste, was almost more than Mrs Santenoy could bear. 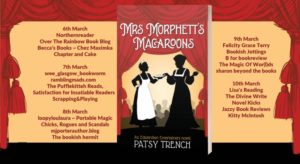 She tried to say as much to the lady wardress. She asked, as a special favour, if she could be allowed to talk to her fellow prisoners, even to teach them. They were probably illiterate, most if not all of them. She could teach them to read and write, as much as she could in her two weeks, it would be doing her a favour as well as them. What was the purpose of keeping them all locked up, alone? At least it would fill the time. At least . . .

The cell door was banged shut in her face. She was on her own, with just the Bible for company and a cell whose walls appeared to shrink with every day she spent inside them.

If she had really known how it would be to be confined to a cell in London’s grimmest prison, would she still have joined the crowds marching peacefully from Caxton Hall to the House of Commons? asked Mrs Santenoy of herself. Might she, at the first sign of trouble – from the mounted police mind, not the women – have ducked quietly out of it and gone home? Alternatively, might she, secretly, have agreed to pay the twenty shilling fine and be done with it? Would anyone have found out? Probably not. Except herself.

It was pride and anger that had carried her along Whitehall. That and her fellow protesters. It was pride that got her through the initial shock of being sentenced and transported to prison. At some point in the future suffragettes who had spent time in gaol would be given badges of honour to tell the world how much they had sacrificed for their beliefs. History would venerate them. Families would be proud.

But right now, on her own, Mrs Santenoy sensed the strength that pride had given her literally seeping away. She felt increasingly cold, hungry, weak and unwell. She spent most of the twenty-three hours of the fourteen days of her sentence sitting on the bed and staring at the floor. At night she slept fitfully, listening to the sounds of weeping from a nearby cell and the distant shouts of someone in serious pain. 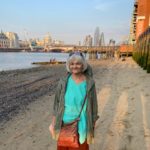 Patsy Trench has spent her life working in the theatre. She was an actress for twenty years in theatre and television in the UK and Australia. She has written scripts for stage and (TV) screen and co-founded The Children’s Musical Theatre of London, creating original musicals with primary school children.

She is the author of three non fiction books about colonial Australia based on her own family history and four novels about women breaking the mould in times past. Mrs Morphett’s Macaroons is book four in her ‘Modern Women: Entertaining Edwardians’ series and is set in the world she knows and loves best.

When she is not writing books she teaches theatre part-time and organises theatre trips for overseas students.

She lives in London. She has two children and so far one grandson.