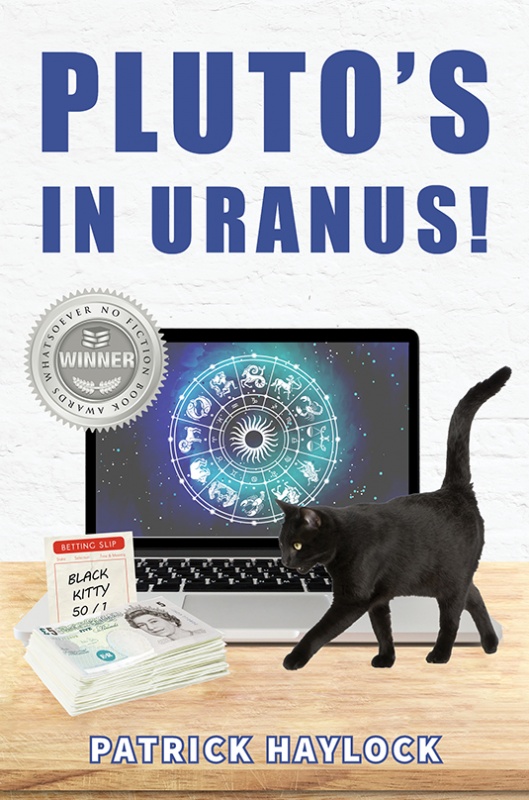 I am pleased to be welcoming Patrick Haylock to Novel Kicks and the blog tour for his novel, Pluto’s in Uranus!

This Christmas Jupiter and Saturn will become closer to each other than they have been for almost 800 years. It is an event that has set the world astrological community abuzz with the possible consequences of such an alignment and its potential impact on global leaders and world events.

But what happens when an even rarer conjunction between Pluto and Uranus occurs and what affect does it hold in store for the lives of everyday ‘ordinary folk’?

Well, it’s something that Dave from the post room is about to find out. Pluto is in Uranus and for him this indicates that everything is about to come up smelling of roses or so he thinks!

Dave suffers from OCF, Obsessive Compulsive Fatalism, and his Achilles heel is his daily horoscope, which is about to become dramatically affected by the historic planetary alignment.

The lucky omens predicted will compel him to take uncharacteristic chances, cross paths with a hotchpotch of larger than life characters who get him embroiled in situations with hilarious outcomes that are way beyond his control and  out of his comfort zone

Patrick has shared an extract from Pluto’s in Uranus! today. Enjoy!

There are plenty of cars that I would love to own, but I’m afraid to say that a BMW is not one of them, although, I wouldn’t turn one away as a gift.

My main reasoning for excluding this vehicle from my motoring bucket list, is based upon experience, observation, and the fact that you need a set of unique driving skills to own a BMW.

Persistent overtaking, undertaking and the ability to maximise the visibility of your registration plate in the rear-view mirror of any vehicle that refuses to move out of your way are key attributes to successfully driving a Beamer!

Erratic headlight flashing and ownership of outside motorway lanes are also useful assets to possess.

Sadly, not being blessed with any of these talents would mean that a BMW would be wasted on me.

However, just prior to calamity it seems Dave begs to differ, because he wishes to own a BMW, have a great adventure and to feature in a book ending with the word pancake. His goals in life are mediocre but achievable.

Up to now his life had been stagnating, as were his attempts to fulfil his aspirations. Every day always began the same: an alarm call, a nature call, a shower, and a shave.

He would skip breakfast, dash to the newsagent’s, run after the bus, sprint for the train, then crawl to his boss for late arrival –yet again!

His habitual lateness was due to OCF – Obsessive- Compulsive Fatalism which he attributed to being born on December 25th.

This syndrome made it imperative for him to read his online horoscope prior to leaving home every day. After many years of failed predictions, todays were going to prove the spectacular exception, because Pluto was in Uranus!!

Even his computer seemed to be in a more optimistic mode, as, far quicker than usual, it launched Dave’s horoscopic homepage.

The colours seemed more vibrant, and the information as clear, precise, and positive… and today, without doubt, it was addressing him personally.

‘Pluto has moved into Uranus, indicating revolution, a time of rebirth, new thinking, and the sweeping out of old ways.

The risk-averse should abandon their fears and take a leap of faith, as an uncharacteristic decision will turn out well!

Those with names that contain an E D A or V should be extra vigilant, as many surprising, and unexpected, opportunities are about to come your way.

Acting upon these fortuitous omens will secure outcomes and rewards beyond your wildest dreams.

New friendships are on the horizon, and a black cat crossing your path will signify an imminent boost to your finances.

The time to be bold is Now, let impulse take the lead, because, today, EVERYTHING is coming up roses!’

He left his home very much enthused.

Striding at a brisk pace, it was not long before he came to the alleyway that he used as a shortcut to the newsagents. On turning the corner, he was startled by a whooshing sound and the sight of a mysterious fiery object speeding,

Instinctively he contorted his body and raised an arm to protect his face. His involuntary reaction deflected the threatening object and prevented it from causing serious injury.

The object thudded into the wall and tumbled down onto the pathway.

With a hiss and a finale of sparks, it spun, spat, and then ceased to be, its fiery ferociousness expired.

His quick reactions had not only avoided harm but had also provided him with the opportunity to identify the aggressive assailant.

Along the side of the charred yellow tube, distinctive branding revealed that it was a BLACK CAT rocket.

The auspicious event was obviously fated, and it reinforced the fact that, as predicted, a black cat had indeed just crossed his path.

Kicking the pyrotechnic to one side, he continued onto and into the newsagents.

Buoyed by the fated incident, he decided that along with his usual redtop newspaper he would buy six scratch cards and six lottery tickets.

After stuffing his change and tickets into his Thunderbirds wallet, he rolled his tabloid into a paper baton and scooted off towards the station.

His luck was in …or was it? 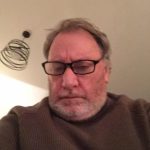 Patrick Haylock is a globally unrecognised writer who if you discount a school sweet pea growing competition, has won no awards whatsoever!

He was born in Enfield at a very dark time in the world. It was 1:45 am, to be precise, and it wasn’t too long before it dawned on him.

To make something of himself he was going to need two things the ability to tell the difference between a green onion and a scallion, and a good education.

Wormley Primary and Baas Hill Comprehensive schools did their best to fulfil both requirements, and after giving them 12 years of his life, they gave him seven printed sheets of paper, and the knowledge that there was no difference between a green onion and a scallion.

He also learned that the difference between onions and bagpipes was that no one ever cries when you chop up bagpipes.

The certificated wisdom secured a national newspaper messenger’s job, which led to an editorial trainee position, followed by a production editor’s post, and progression into freelance journalism.

Patrick lives with his wife in a converted Old Essex Brewery, where he claims the 6% ABV air quality inspires him to craft his nutty tales.

Although a ‘new voice’, in the literary world, those ‘in the know’ will willingly testify that his gift for imaginative storytelling is engaging, and, amusingly unique!

To purchase Pluto’s in Uranus! visit Amazon UK or Amazon US. Click to view the book trailer on You Tube.