I have a HUGE obsession with books. I have been sent some great books over the past few weeks and I have also brought a few new books too. Despite the fact that I have quite a large TBR pile, it doesn’t stop me from adding to it on an almost daily basis. You can never have enough books, right? It was hard to pick but I wanted to share five of them with you – five I am looking forward to reading and reviewing soon. Let me know in the comments if you’ve read any of the books below and what you thought? Do you have any more you’d recommend? 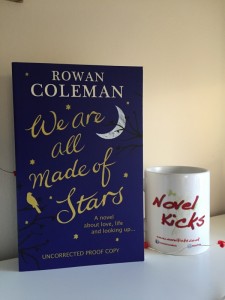 The first book is We Are All Made of Stars by Rowan Coleman.

I love Rowan Coleman. Simple. I am also adoring this cover for her upcoming novel. It’s beautiful. It is due to be released on 21st May 2015 by Ebury who were kind enough to send me a review copy. I can’t wait to get stuck into this book and going by the blurb, it sounds great.

The blurb… Do not miss me, because I will always be with you…I am the air, the moon, the stars. For we are all made of stars, my beloved… Wherever you look, I will be there. Stella Carey exists in a world of night. Married to a soldier who has returned from Afghanistan injured in body and mind, she leaves the house every evening as Vincent locks himself away, along with the secrets he brought home from the war. During her nursing shifts, Stella writes letters for her patients to their loved ones – some full of humour, love and practical advice, others steeped in regret or pain – and promises to post these messages after their deaths. Until one night Stella writes the letter that could give her patient one last chance at redemption, if she delivers it in time…

The second novel I wanted to share is Freedom’s Child by Jax Miller. 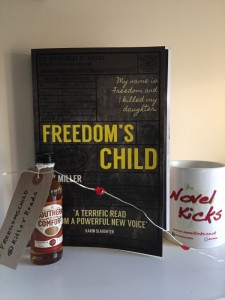 This book sounds like such a roller coaster and it sounds so intriguing. I like mysteries (if you’ve not already guessed.) This is the debut novel from Jax and it is due to be released by Harper Collins on 30th July. I love it when books arrive with little surprises from the publisher. This review copy arrived at my house with a mini bottle of Southern Comfort which the husband will enjoy immensely.

The blurb…A heart-stopping debut thriller about a woman named Freedom, who will stop at nothing to save the daughter she only knew for two minutes and seventeen seconds. Call me what you will: a murderer, a cop killer, a fugitive, a drunk…There’s a lot people don’t know about Freedom Oliver. They know she works at the local bar. They know she likes a drink or two. What they don’t know is that Freedom is not her real name. That she has spent the last eighteen years living under Witness Protection, after being arrested for her husband’s murder. They don’t know that she put her two children up for adoption, a decision that haunts her every day. Then Freedom’s daughter goes missing, and everything changes. Determined to find her, Freedom slips her handlers and heads to Kentucky where her kids were raised. No longer protected by the government, she is tracked by her husband’s sadistic family, who are thirsty for revenge. But as she gets closer to the truth, Freedom faces an even more dangerous threat. She just doesn’t know it yet.

The third novel is How To Build a Girl by Caitlin Moran. 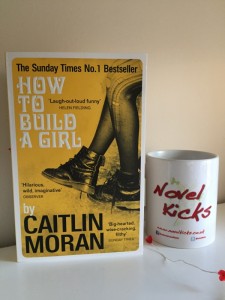 I am in the middle of reading How To Be a Woman (I know, it took me long enough to start it.) I am absolutely loving it so when I went shopping the other day, How To Build a Girl jumped into my basket. I find that this happens with books… a lot.

This is a book I have been meaning to buy for a while and going by the blurb, this book sounds fantastic and I have heard great things about it.

I don’t know why but in my opinion, the cover has a Judy Blume/retro vibe to it. It was released in paperback on 9th April by Ebury Press.

The blurb… My name’s Johanna Morrigan. I’m fourteen, and I’ve just decided to kill myself.

I don’t really want to die, of course! I just need to kill Johanna, and build a new girl. Dolly Wilde will be everything I want to be, and more! But as with all the best coming-of-age stories, it doesn’t exactly go to plan…

The fourth book I wanted to share was The Hourglass Factory by Lucy Ribchester. 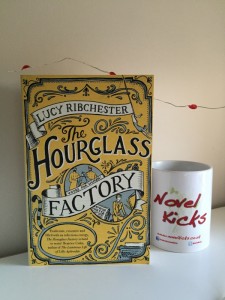 I first saw this book a few days ago when someone recommended it and posted a photo of the cover on Twitter. It looked interesting so I brought it. I think this is one of my favourite covers…ever. It is so gorgeous; bright, vibrant and ornate. It’s going to look amazing on my book shelf. The story itself sounds so fascinating. This reminded me of books like The Night Circus. I am not sure why. I am really looking forward to reading it. Released by Simon & Schuster in January 2015, it is the debut novel from Lucy.

The suffragette movement is reaching fever pitch but for broke Fleet Street tomboy Frankie George, just getting by in the cut-throat world of newspapers is hard enough. Sent to interview trapeze artist Ebony Diamond, Frankie finds herself fascinated by the tightly laced acrobat and follows her across London to a Mayfair corset shop that hides more than one dark secret.

Then Ebony Diamond mysteriously disappears in the middle of a performance, and Frankie is drawn into a world of tricks, society columnists, corset fetishists, suffragettes and circus freaks. How did Ebony vanish, who was she afraid of, and what goes on behind the doors of the mysterious Hourglass Factory?

From the newsrooms of Fleet Street to the drawing rooms of high society, the missing Ebony Diamond leads Frankie to the trail of a murderous villain with a plot more deadly than anyone could have imagined… 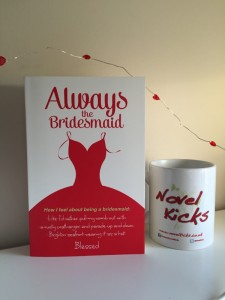 The final book I wanted to share with you is Always The Bridesmaid by Lindsey Kelk.

I am VERY excited to having received a review copy of this book. It’s going to be released by Harper on 7th May 2015 and it’s the latest release by Lindsey (the author of the I Heart series.) Going by the blurb, this sounds perfect for reading outside in this lovely weather we are having at the moment. Novel Kicks is due to be involved with the blog tour for this book next month so keep an eye out for that.