Book Review: A Shop Girl at Sea by Rachel Brimble 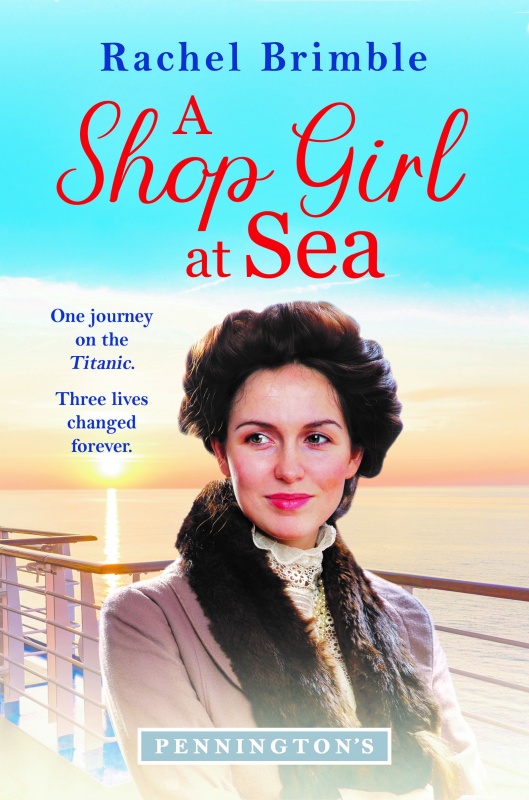 I am pleased to say that Rachel Brimble is here with the blog tour for her latest book in the Pennington’s series, A Shop Girl at Sea.

Amelia Wakefield loves working at Pennington’s, Bath’s finest department store. An escape from her traumatic past, it saved her life. So when Miss Pennington sets her a task to set sail on the Titanic and study the department stores of New York, she couldn’t be more excited – or determined!

Frustrated with his life at home, Samuel Murphy longs for a few weeks of freedom and adventure. Meeting Amelia on board the Titanic, Samuel can’t help wonder what painful history has made the beauty so reserved. But he already has too many responsibilities for love.

Ruby Taylor has always kept her Pennington co-workers at a distance. Making sure her little brother is safe has always been her priority. But when that means accepting Victoria Lark’s offer of sanctuary, more than one of Ruby’s secrets is under threat of being revealed…

I was very excited about being invited onto the blog tour for this book. I found the premise of it intriguing.

Amelia is looking at an opportunity she never dreamed she would have. She has been asked by Elizabeth Pennington to head to America, with a view to gaining insight into American fashion. What’s more, Amelia is to get there by sailing on the new, luxurious Titanic. She can’t wait. The only downside is that the boring Mr Weir is to accompany her.

On board, it is better than she ever dreamed. She also meets Samuel. He is on his way to America as a member of the crew and he knows he has met someone special when he first sees Amelia but before they have a chance to really get to know each other, tragedy strikes and it has them questioning everything they have ever known.

This was my introduction to Rachel’s novels so I’ve not read the previous three books in the Pennington’s series. This did not cause a problem though. There are reoccurring characters but this can be read first if you wish to.

I loved the different personalities in this book, male and female. I feel there was a wide spectrum. The majority of the female characters in this novel are strong, independent and relatable and I loved them, all for different reasons. Amelia is strong and knows what she wants, Elizabeth is proof you can be nice and be successful and Ruby… oh Ruby, I just wanted to wrap her up and look after her. Rachel has created real, vulnerable, courageous characters that are developed well.

The plot moved at a good pace and without giving too much away, I am pleased that it didn’t dwell too much on the actual sinking. It didn’t stop me from being in tears though. What it did concentrate on was how the characters reacted to their situation and I could really feel all the emotions. The imagery was vivid; everything was described so well.

This book had the right balance of historical fiction and romance, that I found it very hard to put down. With it being set around the Titanic, you know what will happen the moment they step onto the boat but Rachel found a unique perspective that brought surprises.

This book is full of emotion . It’s about going after your dreams, laying to rest the events of the past and about finding the resolve to find a happier life. Yes, there are some heart-breaking moments but there is also the message of not taking anything for granted. A strong message that’s very relevant.

I loved this book and I will be checking out the rest of the series as soon as I can. 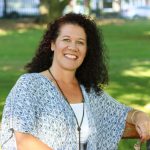 Rachel lives with her husband and two teenage daughters in a small town near Bath in the UK. Her first novel was published in 2007. Since then, she’s had several books published with small presses and since 2012 has written mainstream romance and romantic suspense for Harlequin Superromance (Templeton Cove Stories) and Victorian romance for eKensington/Lyrical Press.

In January 2018, she signed a four-book deal with Aria Fiction for a brand new Edwardian series set in beautiful Bath. The first book, The Mistress of Pennington’s was released in July 2018 with book 2, A Rebel At Pennington’s, following in February 2019. The third book, A Shop Girl’s Christmas followed in September. Most recently A Shop Girl at Sea was released in April 2020.

Rachel is a member of the Romantic Novelists Association and Romance Writers of America. When she isn’t writing, you’ll find Rachel with her head in a book or walking the beautiful English countryside with her family. Her dream place to live is Bourton-on-the-Water in South West England. And in the evening? Well, a well-deserved glass of wine is never, ever refused…

A Shop Girl at Sea was released on 9th April by Aria. Click to view on Amazon UK.

2 Responses to Book Review: A Shop Girl at Sea by Rachel Brimble