Book Review: Confetti at the Cornish Café by Phillipa Ashley 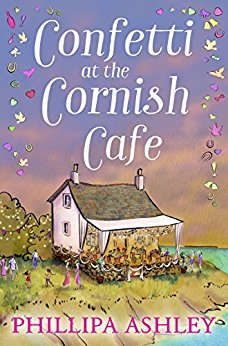 Cal and Demi are preparing to launch their beloved Kilhallon Resort in Cornwall as a wedding venue. With the cliff-top setting and coastal views, it’s the perfect place for a magical ceremony.

But their first clients are no ordinary couple. The bride and groom are internationally famous celebrities Lily Craig and Ben Trevone. As secrets surface and truths are told, can Demi and Cal ensure that Kilhallon’s first wedding is a success? One thing’s for sure, this will be a Cornish celebration to remember . . .

It’s always a sad moment when you come to the end of a beloved series. Harry Potter, the original Star Wars Trilogy, and my latest – ‘Confetti at the Cornish Café’ is the third and final book in the ‘Cornish Café’ trilogy; unless Phillipa can be persuaded to keep them going? But would that be a good thing? All good things come to an end, is a very true saying and some things go on way past their sell-by-dates. This is not the case here.

I have enjoyed, to say the least, Ms Ashley’s tales of Demi and Cal and the third, unusual but certainly important character, Kilhallon (the estate in Cornwall where the story is mainly set). There are many books where the location is important, but few that earn the right to be counted as a character in their own right (Mandalay in Rebecca comes to mind). I want to visit Cornwall again now to try and search it out, but know that despite the beauty of the county, I’d be disappointed.

Ms Ashley has been extremely clever with her pacing of these novels as hints have been dropped about the cause of Cal’s behaviour, which were revealed in ‘Christmas at the Cornish Café’, but here we finally get to meet the little girl from his past that has so affected him, and the way it was written brought tears to the eyes of this reviewer. But what about Cal and Demi you ask? Do they finally get together?

Well, they already are at the start of the book, in that they’re living together now. But the title of the book? Suffice to say, all revolves about a celebrity wedding taking place at Kilhallon, though all is not quite how it appears. Old enemies try to stir things up, relationships are not what they seem and, I could go on and on, but I won’t.

If you enjoyed the first two books, then you’ll be thrilled to continue your adventures and yes, this can be read as a stand-alone book, but things will make more sense if you read the first two.

I very much look forward to reading this author’s next novel. She’s a gem!