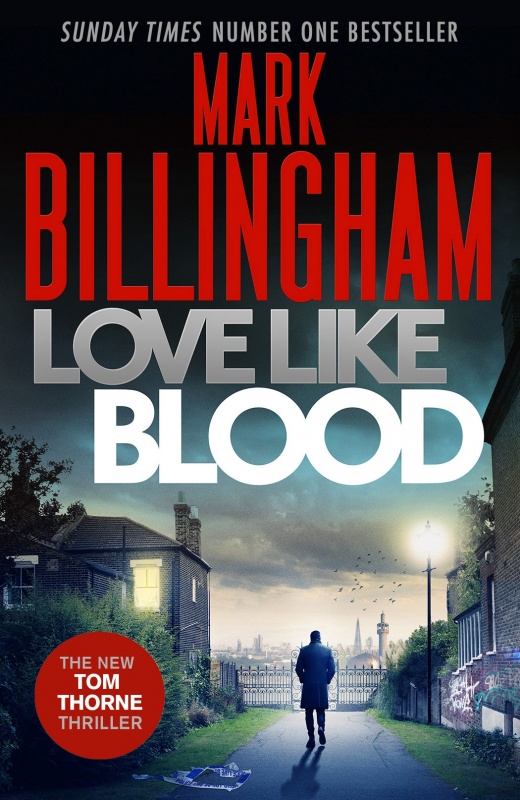 A BLOODY MESSAGE
As DI Nicola Tanner investigates what appears to be a series of organised killings, her partner Susan is brutally murdered, leaving the detective bereft, and vengeful.

A POWERFUL ALLY
Taken off the case, Tanner enlists the help of DI Tom Thorne to pursue a pair of ruthless killers and the broker handing out the deadly contracts.

A CONSPIRACY OF SILENCE
As the killers target their latest victim, Thorne takes the biggest risk of his career and is drawn into a horrifying and disturbing world in which families will do anything to protect their honour.

When I was asked to take part in this blog tour, I was very, very excited.

Love Like Blood is the latest outing for DI Tom Thorne and it is great to have him back. Thorne finds himself helping fellow officer Nicola Tanner who is investigating a series of organised crimes; ones that she feels could all be linked.

This book pushes you straight into the action. It doesn’t shy away from delicate subjects. For example, the overall theme of this book is one I found hard to read about. It focuses on honour killings.

There are some uncomfortable moments for sure. It confronts many current issues and there are some very intense moments (I gasped out loud in places.) There were also moments where I fought tears and of course, Thorne brings his own unique humour and insight.

My sympathy was present for some characters and I immediately didn’t like others.

The plot itself has many twists and turns. I pretty much lost sleep because of this book. I couldn’t stop reading.

Mark Billingham is very good at planting many clues and questions throughout the novel and my suspicions fell on many of the characters throughout. 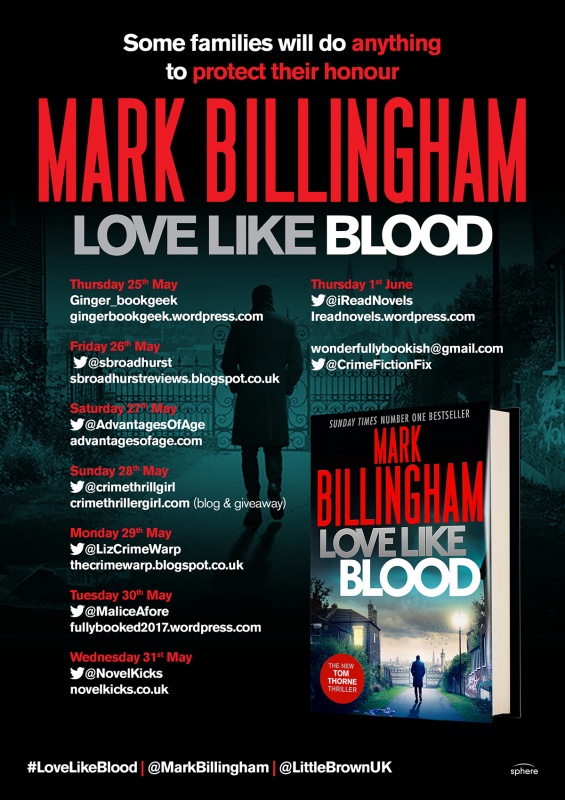 Although there are references to previous plot lines, you don’t have to have read prior novels before this one. The main plot stands alone.

Thorne is a great character who has many layers to him. He’s dedicated but not afraid to bend and break the rules either.

It’s hard to talk too much about this book without giving stuff away which I don’t want to do.

What I will say is that this is a great addition to the Tom Thorne series. It’s engaging, thrilling and has unexpected moments.

Overall, a fantastic crime novel that will have you on the edge of your seat.

The tour continues tomorrow over at https://ireadnovels.wordpress.com

Mark Billingham was born and brought up in Birmingham. Having worked for some years as an actor and more recently as a TV writer and stand-up comedian his first crime novel was published in 2001. 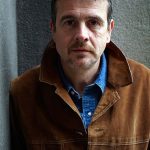 Sleepyhead was an instant bestseller in the UK. It has been sold widely throughout the world and was published in the USA in the summer of 2002.

An acclaimed television series based on the Thorne novels was screened on Sky One in Autumn 2010, starring David Morrissey as Tom Thorne. A new series, based on the novels In The Dark and Time Of Death will be screened on BBC1 in 2017.

Mark lives in London with his wife and two children. He is currently writing his next novel.

For more information about Mark and his novels, visit https://uk.markbillingham.com