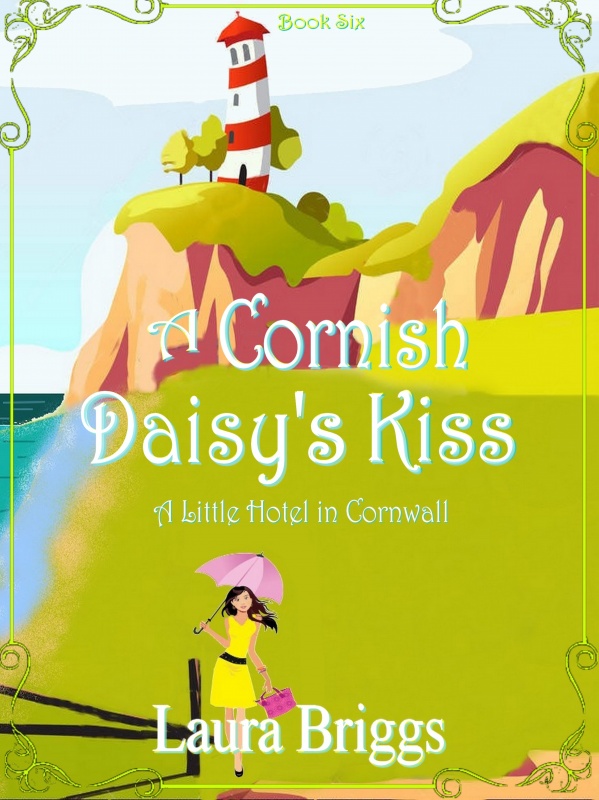 A big lovely welcome to Laura Briggs. Today, she’s here with the blog tour for her latest novel, A Cornish Daisy’s Kiss. This is book six in the Little Hotel in Cornwall series.

Weeks after boarding a train to Paris in pursuit of her writing dreams, aspiring novelist Maisie Clark is right back where she started: on the idyllic shores of Port Hewer in Cornwall, luggage in hand and heart filled with anticipation for what lies ahead. Except that nothing seems the same as Maisie left it, from her place among the staff at the hotel Penmarrow to her budding romance with groundskeeper Sidney Daniels, who isn’t quite ready to overlook the painful consequences of her sudden departure.

Losing Sidney would be unbearable, but Maisie can’t help fearing it might be true if the rift between them proves too deep to heal. She knows her feelings for him are unchanged, but whether he feels the same remains to be seen—particularly since she stopped him from expressing them in the first place. And to make matters worse, her position at the Penmarrow has been filled by another, there’s nowhere for her to live in the village, and her savings are finally dwindling to a pathetic number – with her book still unpublished after her startling discovery about the author helping guide her towards success.

But one thing which hasn’t changed is the drama and excitement at the hotel Penmarrow, where the staff is awaiting inspection from the dreaded owner Ms. Claypool. Stirring up trouble in the meantime is the owner’s special guest ‘Mad Ludwig’, an eccentric architect whose demands are definitely driving everyone on the staff a little crazy. And then there’s the hotel’s mysterious new desk manager, whose behavior ignites Maisie’s suspicions and causes her to become entangled in yet another form of intrigue—one that could unwittingly jeopardize the future of the Penmarrow and everyone who works there, unless Maisie can find a way to undo the harm.

With everything that matters to her most at stake this time, Maisie faces her biggest challenges yet…and her deepest question of the heart as she confronts the reason she returned to Cornwall and the Penmarrow in the first place.

I’ve got an extract from the novel to share with you today so, without further ado, over to you, Laura.

A huge thank you to Laura for this chance to share an extract from my romance read A Cornish Daisy’s Kiss. The sixth book in my current series, it continues the adventures of amateur writer Maisie Clark at the historic hotel by the sea. In the following scene, Maisie learns more about the hotel’s impending sale as she chats with its current owner, Ms. Claypool.

The teapot was still warm and so were the muffins, with thick butter and blueberry preserves, so I helped myself to one last bite. Katy was doing the same in the empty dining room as she texted her current boyfriend, giving me a quick grin before giggling over his latest reply.

She glanced up, and quickly disappeared without saying anything, to my surprise. Then Ms. Claypool seated herself at the window table with her assistant, a briefcase, and the long roll of paper that constituted Ludwig’s blueprints. The assistant scurried away to fetch a fresh pot of tea, leaving the hotel mogul to study some reports and glance out the window at the flowers in bloom.

She noticed me as I swept my muffin crumbs onto my plate. “I didn’t realize you were still a guest here,” she said. “You are the young woman I met on the patio a few days ago — the one who was interested in the plans for the new resort?”

“That would be me,” I said. “But today’s my last day, so I’m bidding goodbye to the dining room before I go.”

“Ligeia is quite the culinary artist,” said Ms. Claypool. “If I thought I could steal her away for my personal chef at the new resort, I would. But I’ll have to make to do with a Michelin star culinary genius to please my investors.” To my surprise, she rolled her eyes slightly. “Sometimes I think I’ll defy them and do it anyway. What can they do to stop me from hiring whatever chefs I please?”

“Probably nothing.” Not unless they had more money than the woman in question.

“Exactly what I want them to say, too,” answered Ms. Claypool, with a pleased smile. So maybe Riley wasn’t exactly wrong about her.

“Tell me,” I said, trembling a little inside. “What’s happening to this hotel?” I was afraid what I might hear in reply, but that wouldn’t stop it from being true.