Blog Tour: Brooklyn Monroe Wants It All by Karen Booth

Book Review: Brooklyn Monroe Wants It All by Karen Booth 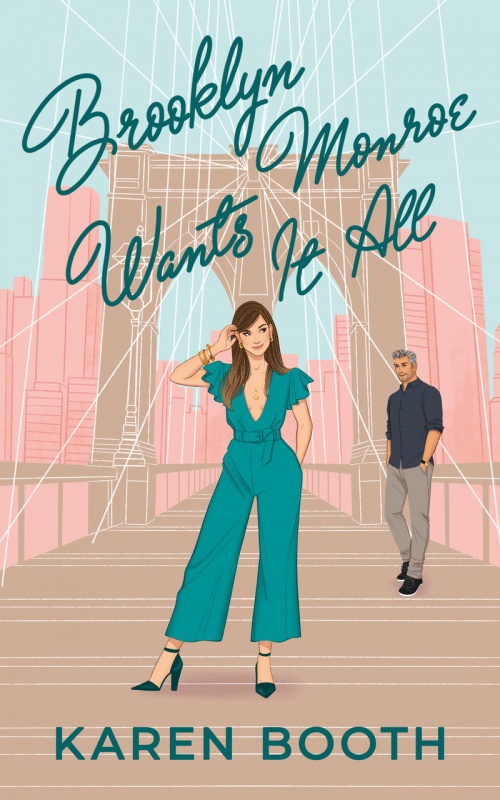 Brooklyn Monroe Wants It All

She can’t hit the snooze on her biological clock forever…

Love, career, kids—Brooklyn Monroe wants it all. Her beauty company? A triumph. Her love life? Total fail. At 42, that makes motherhood her top priority.

With no man in her life, she’s prepared to fly solo, but her plan is derailed when a mailing list mishap turns Brooklyn into a someone-get-me-pregnant internet meme. Making her PR nightmare go away entails a soul-baring interview on national TV. And the guy asking the questions? Her all-too sexy ex.

Talk show host Alec Trakas is the king of bad timing. Case in point, his heartbreaking romance with Brooklyn. Alec was all about commitment but Brooklyn was launching her start-up, and forever wasn’t in the cards.

Now a shot at his ultimate dream job depends on convincing Brooklyn to spill the secrets leading to her viral celebrity. It sets Alec’s star rising, but puts Brooklyn in a sea of flirty men.

Fate has thrown them back together. Sparks are flying. But is the timing finally right? Because having it all might not be worth the risk of losing each other again.

At 42, Brooklyn Monroe knows that, if she wants to be a mother, that time is running out.

As she considers her options, an office joke gone wrong quickly makes her into a viral internet meme, where suddenly everyone knows her plans for motherhood.

Her ex, Alec knows that his career depends on whether he can get Brooklyn to agree to a TV interview about her new found fame. Is fate throwing them together again? Can Brooklyn really have it all?

Brooklyn Monroe Wants It All is the second book in the Never Too Late book series. However, you don’t have to have read Gray Hair Don’t Care to be able to read this one. It stands alone. Lela and Donovan do make an appearance in this though.

Brooklyn is a wonderful, strong, successful character. In fact, the book overall has empowering women and I loved that. These characters have worked hard and achieved success. You don’t feel that they need to be rescued by men.

It shines a spotlight on motherhood, especially for women in their forties and this was something I could immediately relate to.

Alec is a great male lead. He is written as a strong man but I feel that there was also a vulnerability to him. A conversation he has with another male character showcases this perfectly.