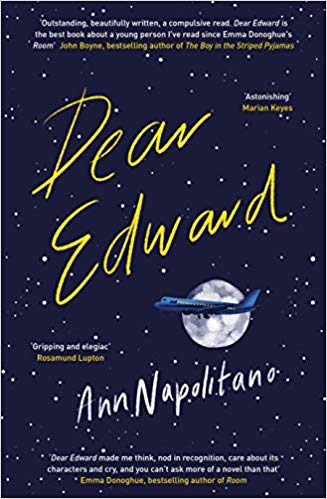 One summer morning, a flight takes off from New York to Los Angeles.

There are 192 passengers aboard: among them a young woman taking a pregnancy test in the airplane toilet; a Wall Street millionaire flirting with the air hostess; an injured soldier returning from Afghanistan; and two beleaguered parents moving across the country with their adolescent sons, bickering over who gets the window seat. When the plane suddenly crashes in a field in Colorado, the younger of these boys, 12-year-old Edward Adler, is the sole survivor.

Dear Edward depicts Edward’s life in the crash’s aftermath as he struggles to make sense of the meaning of his survival, the strangeness of his sudden fame, and find his place in the world without his family. In his new home with his aunt and uncle, the only solace comes from his friendship with the girl next door, Shay. Together Edward and Shay make a startling discovery: hidden in his uncle’s garage are sacks of letters from the relatives of the other passengers, addressed to Edward.

As Edward comes of age against the backdrop of sudden tragedy, he must confront some of life’s most profound questions: how do we make the most of the time we are given? And what does it mean not just to survive, but to truly live?

I am very happy to be part of the blog tour for Dear Edward, the latest novel from Ann Napolitano.

Dear Edward is the story of Edward who is a sole survivor of a plane crash that claims the lives of his parents and older brother. Now living with his Auntie and Uncle, this twelve-year-old is having adjust to life that is so different to everything he’s ever known whilst being in the spotlight post plane crash.

Dear Edward is unlike any novel I’ve ever read. You know when you pick up a book and just from the blurb on the back of the novel you know that you’re going to like it/get a lot from it? This book was an example of that for me.

Set between the events prior to the crash and the aftermath, it is so much more than how one boy deals with it.

This book is beautifully written. I found Edward’s story pre-crash interesting. He, as well as John and Lacey, are incredibly brave and complex people.