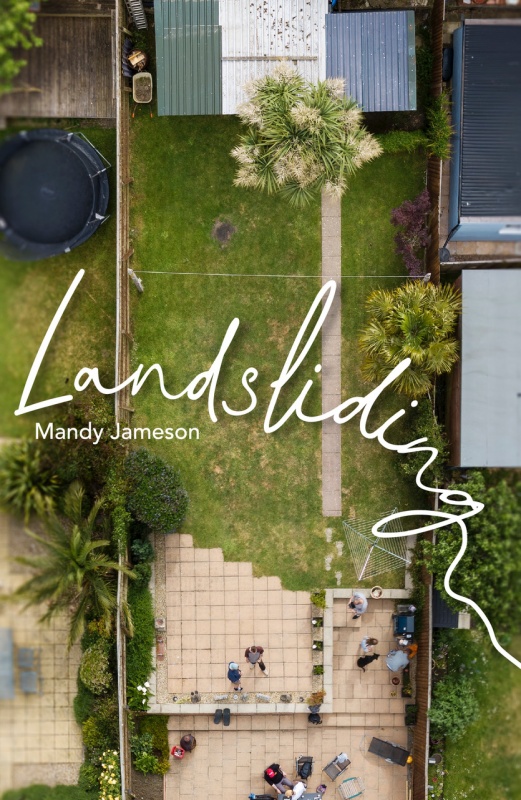 I am happy to be welcoming Mandy Jameson to Novel Kicks today, starting the blog tour for her new novel.  Her book, Landsliding has been published today.

When Julia’s husband leaves her, and their small son Matty, to live with another woman, her friends – especially Caroline and Vick – rally round to help. But when Julia starts a new relationship after a chance meeting, her friends are not quite as supportive.

Julia sees Brendan, the quietly spoken IT guy who comes round to fix her computer, as a loving and protective man and – as time passes – a potential father figure for Matty. Caroline and Vick, on the other hand, see him as jealous, controlling and potentially dangerous. He appears to be a man with a secret past.

What her friends don’t know is that Julia has secrets of her own and, if they get out, they will almost certainly shatter her fragile domestic bliss.

Landsliding is a compelling drama that turns your expectations on their head with a subtle twist to leave you wondering where your sympathies truly lie.

We’ve watched as Julia and Brendan get together, to the dismay of her friends Caroline and Vick who think it’s all happening far too quickly. This is the first time in the novel that we hear Brendan’s point of view.

It was mid August, and Brendan had left another shirt in Julia’s flat. That made a total of four now hanging neatly in her wardrobe and he was cheered by the sight; it offered a pleasing sense of permanence, though his past had shown him that nothing could be taken for granted.

Having known her now for ten weeks, he found it hard to believe how safe, how comfortable he was in Julia’s company. Hopefully she felt the same way, he mused, nosing his Peugeot through streams of early evening traffic. The pavements gleamed moistly, reminding him of last Sunday when he, Matty and Aaron had been caught in a sudden shower after leaving the common.

He planned to make that outing a regular weekly event. Seeing Matty’s face light up when he first suggested it had made him feel triumphant; a success as a stand-in father. When the boy blurted out: ‘Can Aaron come too? Like he used to with Daddy …‘ and Julia showed no reaction, Brendan had tried to defuse any awkwardness by suggesting the boys took their bikes to the common.