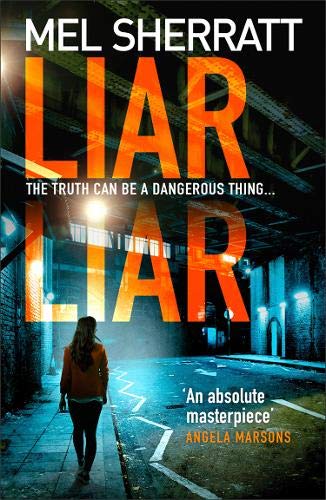 Hello to Mel Sherratt and the blog tour for her latest novel, Liar Liar, released on eBook by Avon on 10th February.

The truth can be a dangerous thing…

When a young boy falls from a balcony in a block of flats, DS Grace Allendale witnesses the shocking aftermath of the tragic event. But strangely, no one will admit to seeing anything – and the parents will only tell the police that it was an accident.

Determined to sort the truth from the lies, Grace is thrown into a case that takes her to the darkest corners of the criminal world – and strikes closer to home than she could have ever imagined…

Liar Liar is the third novel in the DS Grace Allendale series.

Grace witnesses the aftermath of a tragic event. A young boy has fallen from the balcony at a block of flats.

No one will admit they saw anything. The parents are saying it was an accident. The evidence says different.

Can Grace find the truth as she’s one again thrown into the darkest corners of the criminal underworld?

It was so good to be back with Grace. She has become one of my favourite fictional detectives. There is something real about her. I get the feeling that there is so much about her we still don’t know. She has many layers and I look forward to discovering more (please let there be more, Mel.)

This is the third book in the series but it can be read as a standalone. I do recommend the first two books though (Hush Hush and Tick Tock.) They are excellent.

This book deals with some heavy themes, including a crime against a child but it does it with compassion.

The tension builds incredibly well as breadcrumbs are left all the way through the plot to the unseen conclusion.