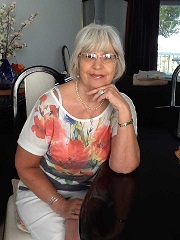 Your latest novel is called Mulberry Lane Babies. Can you tell me a bit about it and what has changed for your characters since the last novel?

New characters and new loves bring changes. Peggy’s husband returns to the lanes and she finds it difficult after being in sole charge of the pub. Janet has to come to terms with her life, and Maureen is busier than ever. They have heard of the new flying bombs the Germans have invented but as yet they have not struck.

However, life is hard enough for the residents. Maureen is the character who has the most to bear in this book. Her motivation is to succeed and hold her family’s business together while looking after her children and her husband. Janet also has too much pain to carry but will eventually move on and Peggy is caught in a dilemma but there is hope that she will be happy one day.

What are the challenges with writing a series of books?

Making sure that you get the continuity right and don’t bring in a character that was written out without having a good reason. You need to keep the characters true but they also need to grow and develop, because otherwise they become stale. Also, you need to bring in new characters but still carry on the threads of the earlier books. Most difficult of all is deciding how much of the previous book to retell. Just a hint here and there is probably best, but some readers want to be reminded and others don’t.

What was it that drew you to the historical setting? What was the planning process like?

I like the period of the Second World War, because it was poignant and tragic and I know it well. It is also very popular with readers who cannot get enough of it. First of all, you plan your main characters and the setting for their lives and then just decide how they will unfold.

What is your typical writing day like? Do you have any rituals or habits?

I write every morning on a laptop. Sometimes I revise in the afternoons. I used to write all day but I find that the morning is when the best ideas come and work done in the afternoon can be laboured. No, I don’t have rituals. I just get on and write.

Which song would best describe you and why?

I don’t think I could name a song that describes me. I like country music as well as ballads.