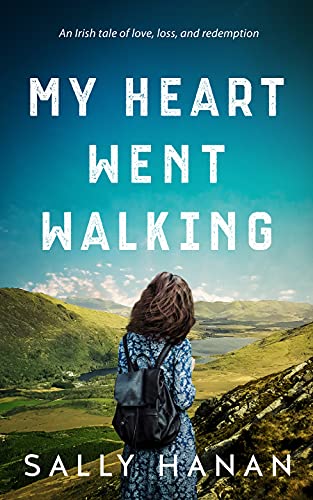 I am pleased to welcome Sally Hanan to Novel Kicks today and the blog tour for her upcoming novel, My Heart Went Walking.

Kept apart by their love for one man, two sisters embark on their own paths towards survival, love, and understanding, until all three finally meet again in the worst of circumstances. And the reality might break them all.

My Heart Went Walking is a heartbreakingly beautiful novel that sweeps from the small Irish town of Donegal to the “big smoke” of Dublin City; a book that celebrates the pull of family and the chance of redemption. It is a novel for everyone who feels connected to the Irish approach to life-that of grit and laughter-and also for everyone who loves an overriding message of hope and restoration in all things.

Una doesn’t want to leave her family, especially her sister, Ellie. It also means saying goodbye to the boy she loves. However, she holds a secret and so must make a choice..stay and reveal her secret or leave everything she’s ever known.

So, she goes to Dublin to seek a new life, with no plan and little money.

Back in her hometown, Ellie has no idea why her sister left. Even Una’s best friend, Cullen doesn’t seem to know where she is.

These three people will be reunited through the most tragic of circumstances. Secrets will be revealed that have the capacity to change their lives forever.

Set in Donegal and Dubin in 1983, My Heart Went Walking is told from the point of view of three people; Una, Cullen and Ellie.

All three are well written and develop in interesting ways. They all have to deal with pretty intense situations and it was easy to forget as I progressed through the book that they were all still teenagers, having to navigate their way through some heartbreaking and difficult circumstances.

Una has to especially grow up incredibly quickly when she finds herself in Dublin, away from home and alone. She seems very strong but when you begin to get to know her, you see that she is just a young girl who has so much fear and doesn’t want to face it. I think a lot of people can relate to that. Whether, as a reader, you agree with certain decisions she makes will be up to you to decide but I felt that she, like Cullen, was trying to do the best she could and do right by the people she loved.

Cullen is a confused guy who doesn’t understand why the girl he loves suddenly disappears. He’s very much a good guy. I really felt for him through this story as he is, in a way, stuck in the middle between his past with Una and his potential future with Ellie.