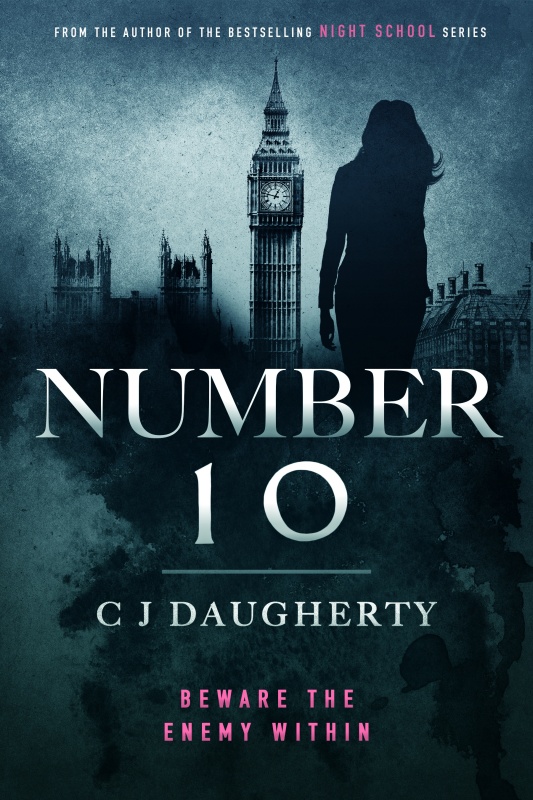 I am happy to be welcoming C.J Daugherty to Novel Kicks today and her new book, Number 10.

Gray’s life has been in turmoil ever since her mother was chosen to lead the country. They had to leave their home and move into the prime minister’s official residence at Number 10 Downing Street. Everywhere she goes, she must be accompanied by bodyguards. The media won’t leave her alone — she’s on the cover of every tabloid, and her behaviour, her appearance, the length of her skirts… everything is constantly judged.

When she’s photographed drunk outside a London nightclub, it makes headlines. Gray is grounded and given new bodyguards – younger, cooler, and harder to fool than the last batch.

It’s Julia, the new bodyguard, who tells her that a new terrorist organisation issued a threat, and the threat is credible. They say they’re going to kill her mother and Gray. When Gray tries to find out more though, no one will tell her. Her mother never mentions it and her bodyguard is forbidden to say more. Locked up in Number 10 night after night, Gray decides to find answers. If someone wants to kill her, she deserves to know why.

One of the few people who understands what’s happening is Jake McIntyre — the son of her mother’s political enemy. Convinced he’s working for his father, her mother forbids her to spend time with him. But Gray believes he might be able to help her learn the truth.

One night, while sneaking through dark government halls, she gets far more than she bargained for. She realises the situation is much worse than even her mother’s security team suspects. But will anyone believe the prime minister’s wild child daughter?

Afraid for herself, her mother, and her country, Gray is determined to find proof. But she must move fast.

The clock is ticking.

C.J has shared an extract today. It sound great so enjoy.

Gray wasn’t going to drink any more alcohol. The cold bottle felt good against her overheated skin, though, and she held it up to her face, pressing the glass against her cheek.

She spun around to see him a few feet away, his expression dripping disapproval. ‘What do you want?’ she asked.

His brow lowering, he glanced from the bottle in her hand back to her face. ‘Maybe you should go easy on that. You don’t look so great.’