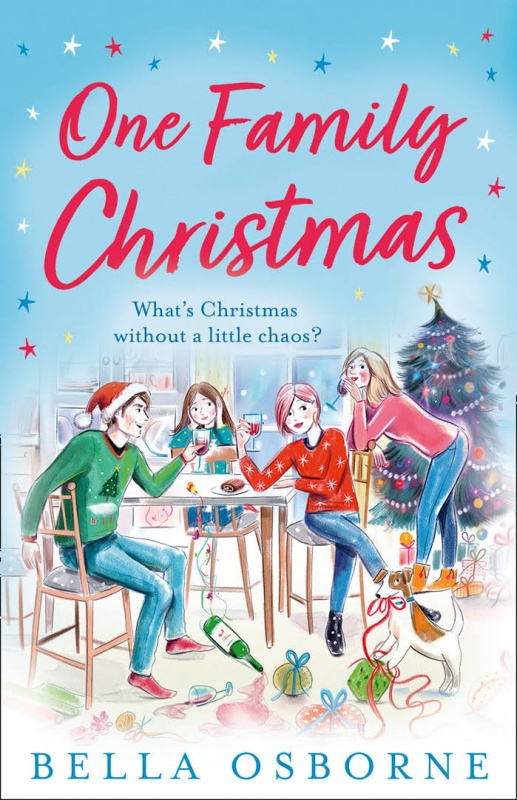 A lovely hello to Bella Osborne. Her new book, One Family Christmas has just been released by Avon.

A big family. A whole lot of secrets. A Christmas to remember…

This year, Lottie is hosting one last big family Christmas at the home she grew up in – just like her Nana would have wanted.

But when her relatives descend on the old manor house, Lottie gets more than she bargained for. Every family has its secrets, but in this family, everybody has one!

So, between cooking a Christmas dinner, keeping tensions at bay and a stray dog out of mischief, she has plenty on her plate and not just misshapen sausage rolls and a frozen turkey. And then her first love shows up – nine years after he walked out of her life.

Can Lottie make their last family Christmas one to remember… for the right reasons?

Lottie’s mission is to have one last family Christmas in the house she grew up in, just like her Nana would have wanted.

When her family descends, drama isn’t too far behind. Lottie quickly finds herself trying to juggle rising tensions, the appearance of a stray dog and meeting new people. On top of that, her first love reappears. She has not seen him since he walked out on her nine years ago.

I am such a huge fan of Bella’s novels and was so excited that she was releasing a book set at Christmas, especially one with such a beautiful cover. One Family Christmas did not disappoint and it’s not just about Christmas. It has so much more to it than that.

Immediately, I loved Lottie and I really felt for her. She is a person with the weight of the world on her shoulders and I wanted to jump in and help her, especially as she has just lost her Nana.

Despite the fact that she gets many things thrown at her (believe me, what can go wrong, does,) she shows resilience and strength.

Joe is a mystery and the layers to him are gradually revealed through the course of the book.

The other supporting characters are a brilliant mix of personalities. There were some I related to more than others but by the end, I wanted everyone to be OK.