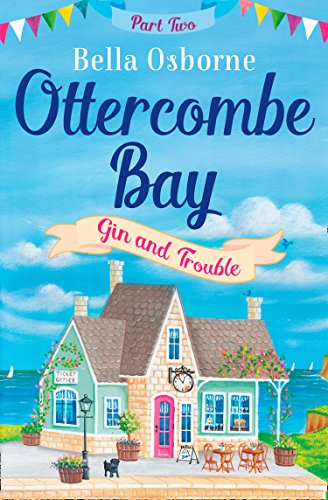 A lovely big hello to Bella Osborne who is returning to the blog today with the blog tour for Ottercombe Bay: Gin and Trouble, part two in a four-part serialisation.

To celebrate the release of Gin and Trouble, Bella and Avon have shared an extract. I hope you enjoy it as much as I did.

Jason was turning out to be a useful person to know. As the local bobby, everyone knew him and therefore he had a wide network he could tap into, particularly as he had a colleague with an uncle working in the local planning department. After a warm-up phone call from Jason he was happy to meet Daisy for a chat. She had made an effort, steered clear of both espresso and Bug’s furry patch on the sofa, and she felt ready for her meeting.

An older-looking gent with thinning hair and thick glasses collected her from the waiting area at the council offices and they did introductions.

‘Thanks for meeting me,’ said Daisy, starting to feel a little less prepared as she followed him into an office and saw a mountain of paper on his desk.

‘No problem but you will need to submit a formal application through the proper process. Anything discussed here today does not in any way constitute agreement of any changes to the property or land we are discussing. I hope you appreciate this?’

Daisy swallowed hard. With formal wording like that he would get on well with Great Uncle Reg’s solicitor. She hadn’t even suggested anything yet and she was being told off. ‘Yes, of course. I’m just looking for guidance. Some ballpark areas that may be worth exploring.’

‘This is the last application we received for the property,’ said the planning officer, passing Daisy a pile of papers. She had a quick flick through and spotted some blueprints – it looked like her grandfather had taken the whole thing seriously and spent some money in the process.