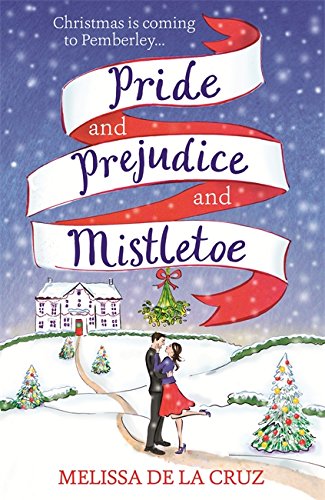 Jane Austen meets Christmas in Pride and Prejudice and Mistletoe which is the latest novel by Melissa de la Cruz.

Darcy Fitzwilliam simply doesn’t have time to fall in love. But this Christmas, a kiss under the mistletoe will change everything…

As partner at a major New York hedge fund, Darcy’s only serious relationship is with her work cellphone. The truth is, she’s too busy being successful and making money to have time for Christmas… let alone to allow romance into her life.

But this year Darcy is coming home to Pemberley, Ohio, for the holidays. There, she runs into her old neighbour and high-school foe Luke Bennet – the oldest of five wayward brothers. When Darcy’s enmity with Luke is re-opened, along with a hefty dollop of sexual chemistry… well, sparks are sure to fly. Can Darcy fall in love – or will her pride, and Luke’s prejudice against big-city girls, stand in their way?

Melissa and the blog tour for her new book join me today and to celebrate the release of Pride and Prejudice and Mistletoe, Melissa and Hodder & Stoughton have shared an extract. Enjoy.

A Taylor Swift cover of “Last Christmas,” originally recorded by Wham! in 1986, strummed from the stereo of the sleek, black town car, where Darcy was sitting in the backseat. Over the driver’s seat she could see Edward’s head bobbing up and down as they drove over the bumpy terrain, and it was somewhat of a comfort. Edward had worked for the Fitzwilliam family since Darcy was a small girl, and though she told herself over and over that she hadn’t missed anything about her hometown in the eight years since she’d fled, the truth was she had missed Edward.

Despite being only fifteen years older than she was, he had a grandfatherly twinkle in his blue eyes and an impressively sharp memory that she had always admired. He always remembered everything she told him. And she told him plenty, as he was the only person in her family she felt she could trust.

“She’s going to be okay,” Edward said from the front seat. “So you can wipe that worried look off your face, my dear.”

“Oh, I hope you’re right,” she said, chewing her bottom lip anxiously. “But you know how my mom is. She’ll never let people know if she’s suffering.”

“That’s true.” She watched his head bob up and down. “You know, you haven’t aged one bit,” he said, looking at her reflection in the rearview mirror.

“I know.” She tried to smile through her nerves. “You always told me if I kept scowling I’d have forehead wrinkles by twenty- five.”

He never called her that. Darcy, Darce, the Darcinator, some- times Darce-Tastic, but never Miss Fitzwilliam—that was her mother’s name. Doing so now was a playful acknowledgment of the way she’d skyrocketed to a position of unfathomable power and status, in the time since he’d last seen her, that even her own blue-blooded family had never quite held. He was proud of her, she could tell, and she appreciated it. At least somebody from her old life was.

She swallowed hard, so unsure of how she’d be received in her family home. How should she act when she saw them all again? How did she used to act around them? Suddenly she couldn’t remember; suddenly she felt seized by anxiety, like this one interaction with her parents and brothers after eight years would make or break their relationship for the entire future.

From the outside, anyone would think that Darcy Fitzwilliam was doing unusually well on her own in New York City, and in many ways she was. But in her gut she knew something was horribly off, and when she’d got that middle-of-the-night phone call, she finally knew what was missing. Her glamorous Manhattan life was missing family, people to love and to be loved by. She’d hopped on the first flight home. Now, for the sake of at least making a good impression on Edward, she used all her energy to shake off the nervousness and said, “My secret? A lady never reveals her secrets, Mister Peterson.”

She turned then to face her refection. It was true: at twenty- nine and as partner at the second most successful hedge fund in NYC, she didn’t look a day over twenty-four. She was con – dent in her good looks and considered herself to be just as gor- geous as everybody told her she was. Her slender, heart-shaped face boasted elegantly chiseled cheekbones; a lightly freckled, ski-slope nose; big, stormy gray eyes shuttered by naturally long lashes; and a perfectly pouty set of pale pink lips. Now and then she started to think they were losing their youthful luster, and in those moments she’d briefly toy with the idea of getting them plumped. But the thought was always eeting, as she had far more important things on her mind. The real question for Darcy was not to plump or not to plump. No, it was something far less simple and far more troubling.