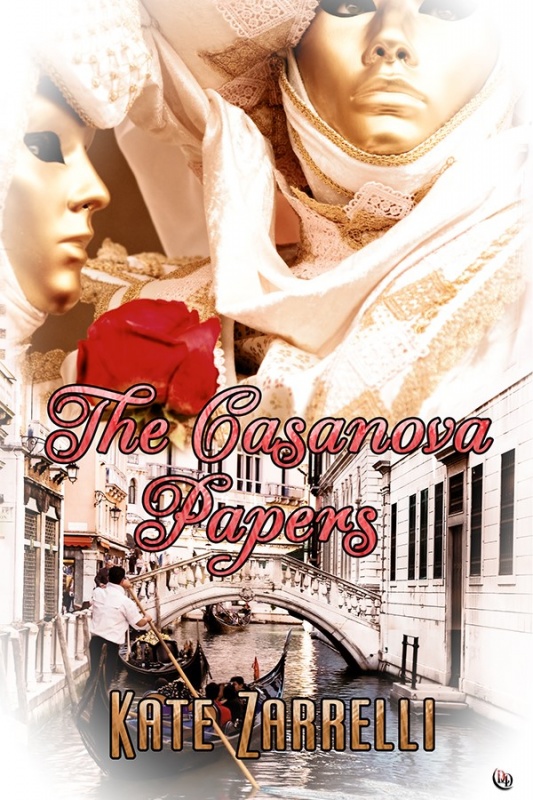 A big welcome to Kate Zarrelli. She’s here with the blog tour for her latest novel, The Casanova Papers.

Ellie Murphy takes a contract teaching English at a school in Venice. There she meets the sexy, enigmatic Professor Piero Contarini, from an ancient Venetian family, and agrees to help him in his work curating a new edition of the memoirs of the famous seducer, Giacomo Casanova. T

aking their task seriously, they start to enact his adventures with each other, ecstatically revealing their own kinks as they do so. But who is watching them from the shadowy alleyways of Venice?

Kate has shared an extract with us today so sit back and enjoy.

Ellie, a young English teacher working in Venice, has agreed to help the enigmatic Professor Contarini curate his definitive edition of the writings of Casanova….

Piero walked her through the maze of alleys and passageways with such confidence that Ellie thought he could probably have done so blindfolded. Shortly after they had crossed the Grand Canal at the Accademia Bridge, she lost her bearings completely. Sometimes they would emerge into a piazza bright with lights and laughter, only to plunge into a dimly lit gap between high, dark buildings, in which all that could be heard was the sound of their footsteps. Often the narrowness of the path meant he was right at her shoulder—he’d indicate where to turn by a hand gently at her elbow guiding her over a little bridge across a darkly-glittering canal. Later, the hand came to rest more proprietorially in the small of her back. I’m completely in his power. If I turned and ran away from him now, all he’d need to do is stand and wait, as I’d be bound to go round in circles and meet him again.

“First stop,” he said, coming to a halt in a little square. He pointed up at a plaque. “Casanova was born right here,” he said, “the son of two actors, but he was brought up by his grandmother, perhaps the only woman he ever really loved.”

Ellie looked up at him. “I wondered about that, too, reading his life. Always after the next conquest, never satisfied—like he was searching for something he never really found.”

“You’ve got him, Ellie. I think he was a lonely man at times, even though there were plenty of women who wanted to love him. He ruined their lives in some ways—who’d be satisfied with another man after he’d had them, the greatest lover of them all? Yet he got close to none of those women. He thought he was in love for a while, and then his head would be turned by someone new.”