Blog Tour: The Choir on Hope Street by Annie Lyons

The Choir on Hope Street by Annie Lyons – Extract 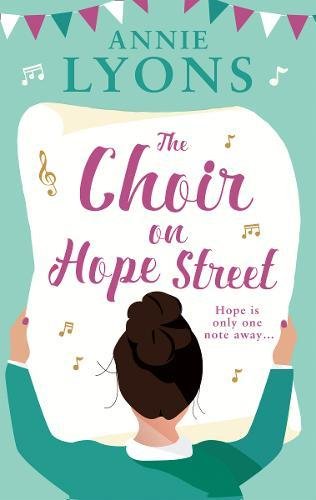 Hello everyone. Today, I am pleased to be welcoming Annie Lyons to Novel Kicks with the blog tour for her new book, Choir on Hope Street which is due to be released on 6th April by HQ.

The best things in life happen when you least expect them
Nat’s husband has just said the six words no one wants to hear – ‘I don’t love you any more’.

Caroline’s estranged mother has to move into her house turning her perfectly ordered world upside down.

Living on the same street these two women couldn’t be more different. Until the beloved local community centre is threatened with closure. And when the only way to save it is to form a community choir – none of the Hope Street residents, least of all Nat and Caroline, expect the results…

Thanks to HQ and Annie, we have an extract to share with you today. Enjoy!

That was it. Six words delivered so simply, as if he were reading the news.

‘Good evening and here is the news. The marriage of Natalie and Daniel Garfield, which lasted for fifteen years, is over. In a statement today, Mr Garfield said, “I don’t love you any more.” Mrs Garfield responded by punching him in the face and trashing the house.’

At least that’s what I wished I’d done later but at the time an odd sensation of calm descended. It was as if this wasn’t really happening to me. It was at best some kind of joke and at worst something that could be sorted.

It had the ring of one of those American teen shows that Woody loved to watch on Nick Jr.; all jazz hands and sparkly teeth.

We were a great couple. Everyone said so. We were the kind of couple that others looked at with awe and secret envy.

Everybody loved Dan. He’s just one of those men who people like – old ladies, babies, men, women, children have all told me over the course of our marriage, what a really great guy he is.

I would go on nights out with my female friends as they ripped apart their partners and husbands, picking over their faults like vultures feasting on carrion. I would nod with sympathy but never really had anything to add. They would often turn their sleepy, drunken gaze to me, pat me on the shoulder and slur, ‘Course you’re lucky, Nat. You’ve got

And he was. Possibly still is.

Dan was my husband, my soul mate. Of course he had his faults. The underpants on the floor and the toilet seat in the perpetual ‘up’ position were an irritation, but not exactly a major crime against domesticity. He was, is a good man – a good husband and father. He was my happyever- after.

Naturally, we had disagreements and wobbles. Who doesn’t? We didn’t spend as much time together on our own as we would like but that’s to be expected. We’re busy with work, Woody and life. Obviously it would be lovely to go on the odd date-night or even have sex but frankly, we were usually too knackered. I’d always thought that the shared bottle of wine o n Friday night with a movie was good enough. Clearly I have been labouring under a major misapprehension.

Initially, I went into full-on denial mode when he dropped the bombshell. I wondered later if my body had actually gone into shock in a bid to protect myself from the truth. Certainly at the time, my brain sent me a quick succession of messages to counter his statement: he didn’t mean it (he did), he’d been drinking (he hadn’t), he was tired (true) and angry (not true). It wasn’t until I’d picked over the remnants of that evening with various friends (my turn to be the vulture now) that I’d fully taken in the order of events.

It was a Tuesday evening. I hate Tuesdays. They make me feel restless and impatient. Monday is supposed to be the worst day but for me, it has always been Tuesday. I can deal with the post-weekend slump and Monday is usually my most productive day but by Tuesday, I am longing for the week to move ‘over the hump’ towards the downhill joy of Thursday. I often long for a glass of wine on Tuesday evenings but on this particular day I was disappointingly sober because I was having a so-called healthy week.

At least I was before he said it.

It was around 8.30 and we had just finished dinner.

Woody was reading in his room before lights-out and I had been about to go and tuck him in. I normally love this part of the day: the feeling that another episode of motherhood is successfully complete; no-one died. Everyone is safe.

If I had been paying attention, I would have noticed that Dan was particularly uncommunicative during dinner.

Again, it wasn’t until later that I recalled the details: his downward gaze and hands fidgeting with the cutlery, his water glass, the pepper mill.

I had been telling him about a problem with my latest book. I am a children’s picture-book writer and have enjoyed some success with my series of books about ‘Ned Bobbin –
the small boy with the big imagination’, as my publisher tags it. There have been six books so far and my editor wants another three but I was struggling with ideas and wondering whether to take him down the super-hero route.

When I recalled the conversation later, I realised that I had done all the talking; posing and answering my own questions with just the odd ‘mhmm’ or nod from Dan. That was the problem with being a writer – you spent too much time at home on your own with no-one to talk to.

I talk to myself all the time when I’m working. I read back what I’ve just written, talk to the radio or hold imaginary conversations with all manner of people, including Ned.

I read somewhere that adults have a certain number of words they need to say in a day and that the word quota for a woman is higher than a man’s. I believe this. It isn’t unusual, therefore, for me to unpack my day to Dan when he gets home. I thought he liked it. Maybe I was wrong about that too.

I had finished my dinner: an unimaginative stir-fry containing any vegetable-like items I’d found in the fridge on opening it at 7.30. Woody had eaten earlier. He was eight years old and always starving when he returned home from school so I tended to feed him straight away and then either Dan or I cooked our dinner later.

I stood up to clear the plates, reaching out for Dan’s.

He looked up at me and only then did I notice how pale he looked – his face, slightly pinched with age, but still handsome. He stared at me, unsmiling and I realised he was nervous.

‘What?’ I asked with an encouraging smile.

He swallowed and bit his lip. Then he said it.

At first I assumed he was joking.

‘Yeah right, and I’m having an affair with James McAvoy.’ I shook my head and made for the door.