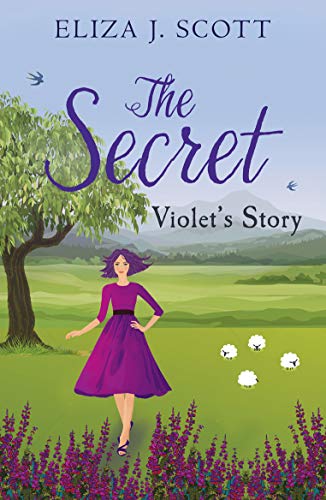 It’s been two years since glamorous and ambitious Violet Smith fell head-over-heels in love with blacksmith Jimby Fairfax, and moved back home to the North Yorkshire village of Lytell Stangdale to be with him.

Life couldn’t get much sweeter. Their romance is blooming and Romantique – the business she set up with Jimby’s sister Kitty, designing luxurious underwear and burlesque costumes with the odd wedding dress throw in – is thriving.

But on a romantic weekend break, a face from her past triggers a series of events which send Violet into turmoil. She finds herself with no alternative but to reveal a secret she’s buried deep for the past sixteen years. A secret she hasn’t shared with anyone, not even her best friends, Kitty and Molly, and they share everything.

With the revelation forcing a wedge between herself and Jimby, heartbroken Violet fears that he won’t ever be able to think of her in the same way again and won’t want anything more to do with her.

As ever, Kitty and Molly rally round, offering their advice and support but Vi is worried that keeping her secret was just a step too far for Jimby.

Will she succeed in showing him their love is strong enough to overcome it?

The Secret – Violet’s Story is book 3 in the Life on the Moors Series.

This third novel in the Life on the Moors series focuses on Violet. She’s now been with Jimby for two years and is blissfully happy. However, a secret from her past unexpectedly comes back up to the surface and threatens to derail everything Violet now holds dear, especially her relationship with James Fairfax.

I have been in love with this book series since the first book, which was Kitty’s story. Whenever a new book has arrived, it’s been like transporting back to Yorkshire and having a catch up with old friends; that’s how Violet, Molly and Kitty feel to me. I want to hang out with them.

I don’t have an overall favourite amongst the three women although Violet’s sense of style sounds amazing. It was nice to get to know her a little better as I progressed through the book.

Despite her ‘no cares’ attitude to the world, Violet has a large vulnerable side not helped by this secret she’s holding close to her chest. I can’t go into any detail about it as it would give too much away. I have grown to care so much for these characters and Violet’s situation makes me very sad.