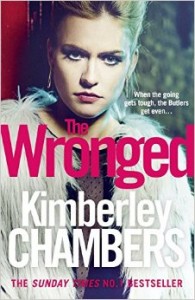 We are excited to be welcoming Kimberley Chambers today and kicking off her video blog tour for her new novel, The Wronged which is due to be released by Harper Collins on 12th March 2015.

Kimberley was previously a disc jockey, a street trader and a mini cab driver before writing her first novel, Billie Jo. She is now a full-time writer and she lives in Romford. Her latest novel is the third in the Butlers series (the first two being The Trap and Payback.

When the going gets tough, the Butlers get even… ‘Murdered in 1980 she was, bless her. Now I’ll tell you the story of everything that’s happened since…’ No parent should ever have to bury their child, but God knows the Butlers have buried more than their fair share. Now, Vinny and Michael are planning the downfall of all who’ve wronged them. The Butlers don’t forgive or forget, and they take their secrets to the grave. As yet more tragic events rip the family apart, loyalties are on a knife-edge. Times are changing in the East End, and the brothers who have always stuck together are at each other’s throats. As the old saying goes – you keep your friends close, and your enemies closer…But you keep your family right where you can see them.

We chat to Kimberley about her new book, her advice for new writers and her favourite place to write.

WIN A SIGNED COPY OF THE WRONGED. THIS COMPETITION IS NOW CLOSED.