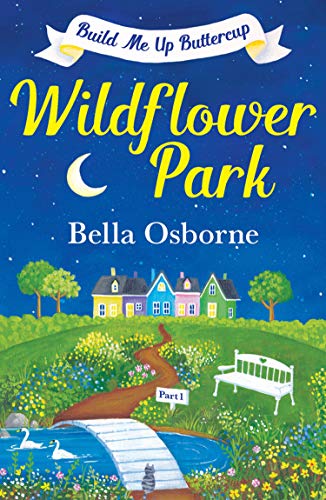 It’s lovely to be welcoming back Bella Osborne to Novel Kicks (we’ve missed you,) and the blog tour for the first part in a four-part serial, Wildflower Park: Build Me Up Buttercup.

Life’s not always a walk in the park…Escape the everyday with Part One of a brand-new four-part serial from the author of Coming Home to Ottercombe Bay.

Anna thought she’d found The One… until he broke off their engagement exactly one year before their wedding day. Now faced with a different type of countdown, Anna moves into her own place on the edge of the gorgeous Wildflower Park, hoping that a bit of greenery and a fresh start will do her the world of good.

With a little help from her good friend Sophie, a no-nonsense rescue cat and an attractive new work colleague, Anna is doing well moving on with her life… until her ex fiancé is hired into her team at work. But that proves to be the least of her worries, because she’s been swept off her feet by someone she really shouldn’t be falling for…

As much as she needs a new beginning, can Anna overcome her the difficulties in her past that prevent her from moving forward?

I have reviewed the novel below but first, Bella and Avon have shared an extract from part one of Wildflower Park: Build me up Buttercup. Enjoy.

Seven o’clock came and Anna checked her mobile. She wanted this to be over. She wanted Liam to come in, take his things and go with as little small talk as possible. She was moving on with her life and this was a key milestone along her journey. The knock on the door made her jump and she shook her head at her own silliness.

‘Hi,’ she said, opening the door. Liam appeared relaxed and casual, the polar opposite of how she was feeling. ‘Come in.’

They walked through to the lounge and Anna pointed at the box of random items. ‘Here you go. I think that’s everything.’

‘This is nice,’ said Liam, having a good gawp around the room.

‘Thanks,’ said Anna. She wanted to pick the box up and thrust it at him but she wouldn’t be so rude.

‘So,’ said Liam, rubbing his hand across his chin. ‘Have you been okay?’

‘Yes, terrific, thanks.’ She said it too enthusiastically and Liam looked a little taken aback. Or was that hurt?

‘Oh, that’s good.’ He pursed his lips. Liam wasn’t paying attention; he was still inspecting the room and it annoyed her.

She wondered why he wasn’t just taking the box and leaving. He sat down on the sofa. Her sofa. Anna folded her arms. ‘Did you want a coffee or something?’ she asked out of politeness, which irritated her further. She was so British.

He smiled and she wondered why. ‘A coffee would be great – or something stronger. Have you still got the bottle of Châteauneuf you took?’