Book Review: All The Things You Are by Clemency Burton-Hill 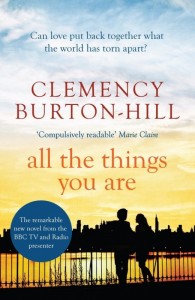 All The Things You Are by Clemency Burton Hill.
Headline Review, April 2014.

When New York journalist Natasha Bernstein loses her job and discovers her fiance has been keeping a dark secret, her world collapses. Turning to her family, she takes inspiration from her formidable grandmother Esther, who runs a community centre in downtown Manhattan. As she starts to rebuild her life, Natasha’s friendship with Rafi – the enigmatic architect working on Esther’s centre – restores her sense of wonder at the world and her faith in who she is. But when Rafi and Natasha take a trip to Jerusalem, they are plunged into a story far deeper than their own. Here, questions of family and loyalty mean more than life itself, and they must ask themselves what they are ultimately prepared to fight for. In a divided world, is it history or love that makes us who we are?

Natasha is a successful journalist but her life quickly seems to fall apart when she loses her job after taking a risk on a story. Around the same time, she finds out that her fiancé has been keeping a secret from her. In her time of crisis, she turns to her family, especially her inspirational grandmother, Esther who runs a community centre in downtown Manhattan.

Natasha tries to rebuild her life and so she begins to collaborate with her grandmother by agreeing to write her memoirs. Esther is a survivor of the holocaust. She is a strong and formidable character and I warmed to her straight away – I think because of how she was portrayed. It reminded me a bit of my own Nan and I liked that (although the two women don’t share the same history.) As a result of this, she was probably one of my favourite characters.