I will 90% always prefer books to any movie made that is based upon them. For example, although the movie was great, I will prefer Where Rainbows End to Love, Rosie (same with P.S I Love You for that matter.) My Sister’s Keeper is another example. I preferred the book and definitely preferred the novel’s ending to the movie adaptation. It is always tricky when it’s a book you love so much. You have such an idea of what the scenery looks like, the appearance of the characters; a solid picture is formed and it’s hard to shift.

However, there are exceptions – Bridget Jones’ Diary, I’m talking to you. I adore the film as much as the book. The second movie not so much but it was always going to fall short because of its lack of the Colin Firth interview scene which couldn’t be done for obvious reasons. I did think the adaptation of The Fault in Our Stars was quite faithful to its source material. I will read things though and I will wonder what the scenes would look like if they were to be adapted into movies or I will think that what I am reading would make a great film. 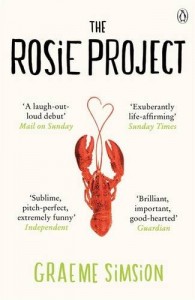 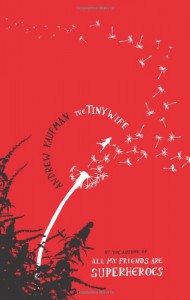 The Rosie Project by Graeme Simsion.

I adored this book and Don Tillman is one of my favourite fictional characters. Rumours are that this has already been put into pre-production/development and this makes me very excited. There are some humorous and very touching moments in this book and I think it will translate well to film (especially if Simsion has anything to do with the script.)

The basic premise is that having never had a second date, Don Tillman devises the Wife Project – a scientific experiment to find the perfect wife for him. Then in walks Rosie, the girl that doesn’t fit into any of his criteria.

According to IMDb, Jennifer Lawrence has been cast as Rosie. In my opinion, Jennifer has proven that she can do serious and quirky (she was great in The Silver Linings Playbook.) I am eagerly anticipating this adaptation.

The Tiny Wife by Andrew Kaufman is another book I’d love to see turn into a movie.

I loved this book. The plot is so interesting and I took away a great message from it and so I think it would make a great film. A robber walks into a bank but instead of taking money, he steals an item of sentimental value from each of the people in the bank. After the robbery, strange things start happening to these people. It’s a book about appreciating what you have before it is too late.

The plot is a great premise and I’d be interested to see where they would go with the film. There is such an atmosphere to this book. The only thing about this book if it were to be adapted is that it’s only about eighty pages long so there would be a bit of script padding which isn’t always good.

Another book I’d like to see adapted is Red Queen by Victoria Aveyard.

END_OF_DOCUMENT_TOKEN_TO_BE_REPLACED 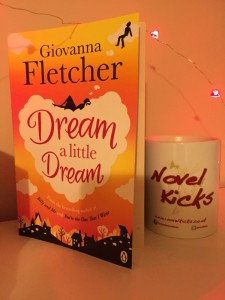 Dream a Little Dream is the third novel from Giovanna Fletcher. It’s released today (18th June) by Penguin and is available in paperback and as an e-book.

I have to say, I absolutely ADORE this cover. It reminds me very much of Lisa Jewell’s earlier covers – beautiful and romantic. Love, love, love!

Here’s the blurb for Dream a Little Dream:

Sarah is doing just fine. Sure she’s been single for the last five years, and has to spend an uncomfortable amount of time around her ex-boyfriend and their mutual friends, and the rest at her tediously mundane job, but it’s fine. She’s happy(ish).

But it’s not surprising that when Sarah starts dreaming about a handsome stranger, she begins looking forward to falling asleep at night. Reality isn’t nearly as exciting. That is until her dream-stranger makes an unexpected real-life appearance, leaving Sarah questioning everything she thought she wanted.

Because people never really find the person of their dreams… do they?

I was a big fan of Billy & Me and I recently read You’re The One That I Want and loved that too so I was really excited when the review copy of Dream a Little Dream got delivered.