Book Review: Christmas at The Falling-Down Guesthouse by Lilly Bartlett 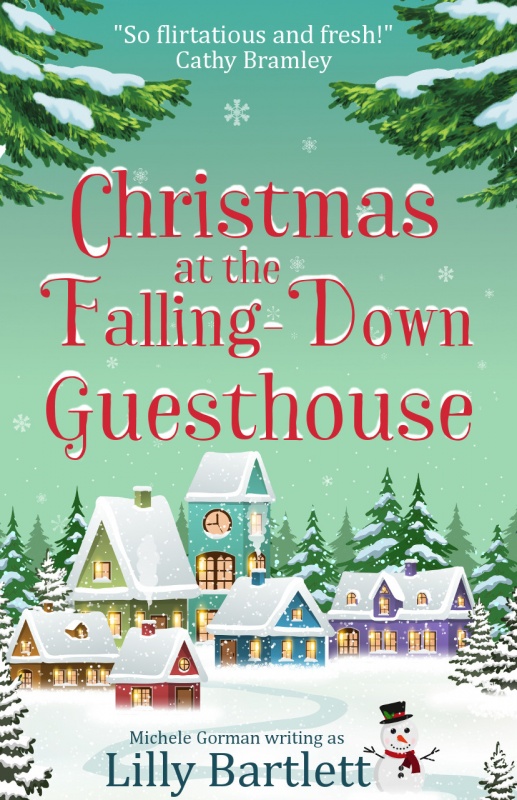 Put your feet up and tuck into the mince pies, because you won’t have to lift a finger to enjoy this Christmas at the Falling-Down Guesthouse!

Too bad the same can’t be said for single mother and extremely undomestic goddess, Lottie. When her beloved Aunt Kate ends up in hospital just before Christmas, Lottie and her seven-year-old daughter rush to rural Wales to take over her B&B. A picky hotel reviewer and his mad family are coming to stay, and without the rating only he can give them, Aunt Kate will lose her livelihood.

But Lottie can barely run her own life, let alone a hotel. How will she manage to turn the falling-down guesthouse into the luxurious wonderland the reviewer expects? And could the mysterious taxi driver, Danny, who agrees to help her, turn out to be the real gift this season?

END_OF_DOCUMENT_TOKEN_TO_BE_REPLACED 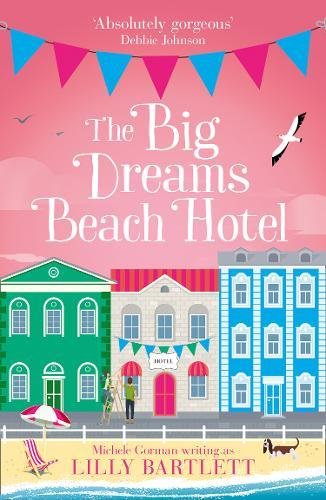 Lilly Barlett’s new novel, The Big Dreams Beach Hotel is due to be released by Harper Impulse tomorrow. I am delighted to be able to share with you an extract from Lilly’s new book. First, here’s the blurb…

What’s worse, the hotel’s new owners are turning it into a copy of their Florida properties. Flamingos and all. Cultures are clashing and the hotel’s residents stand in the way of the developers’ plans. The hotel is both their home and their family.

That’s going to make Rory’s job difficult when he arrives to enforce the changes. And Rosie isn’t exactly on his side, even though it’s the chance to finally restart her career. Rory might be charming, but he’s still there to evict her friends.

How can she follow her dreams if it means ending everyone else’s?

New York is where I fell head over heels for a bloke named Chuck. I know: Chuck. But don’t judge him just because he sounds like he should be sipping ice-cream floats at the drive-in or starring in the homecoming football game. Rah rah, sis boom bah, yay, Chuck!

Believe me, I didn’t plan for a Chuck in my life. But that’s how it happens, isn’t it? One minute you’ve got plans for your career and a future that doesn’t involve the inconvenience of being in love, and the next you’re floating around in full dozy-mare mode.

I won’t lie to you. When Chuck walked into our hotel reception one afternoon in late October, it wasn’t love at first sight. It was lust.

Be still, my fluttering nethers.

Talk about unprofessional. I could hardly focus on what he was saying. Something about organising Christmas parties.

‘To be honest, I don’t really know what I’m doing,’ he confided as he leaned against the reception desk. His face was uncomfortably close to mine, but by then I’d lived in New York for eighteen months. I was used to American space invaders. They’re not being rude, just friendly. And Chuck was definitely friendly.

‘I only started my job about a month ago,’ he told me. ‘It’s my first big assignment, so I really can’t fuck it up. Sorry, I mean mess it up.’ His blue (so dark blue) eyes bore into mine. ‘I’m hoping someone here can help me.’

It took all my willpower not to spring over the desk to his aid. Not that I’m at all athletic. I’d probably have torn my dress, climbed awkwardly over and landed face-first at his feet.

Keep him talking, I thought, so that I could keep staring. He looked quintessentially American, with his square jawline and big straight teeth and air of confidence, even though he’d just confessed to being hopeless at his new job. His brown hair wasn’t too long but also wasn’t too short, wavy and artfully messed up with gel, and his neatly trimmed stubble made me think of lazy Sunday mornings in bed.

See what I mean? Lust.

‘I noticed you on my way back from Starbucks,’ he said.

At first, I thought he meant he’d noticed me. That made me glance in the big mirror on the pillar behind him, where I could just see my reflection from where I was standing. At five-foot four, I was boob-height behind the desk in the gunmetal-grey fitted dress uniform all the front-desk staff had to wear. My wavy dark-red hair was as neat as it ever got. I flashed myself a reflected smile just to check my teeth. Of course, I couldn’t see any detail from where I stood. Only my big horsy mouth. Mum says giant teeth make my face interesting. I think I look a bit like one of the Muppets.

‘Do you have the space for a big party?’ he said. ‘For around four hundred people?’

He didn’t mean he’d noticed me; only the hotel. ‘We’ve got the Grand Ballroom and the whole top floor, which used to be the restaurant and bar. I think it’s even prettier than the ballroom, but it depends on your style and your budget and what you want to do with it.’

Based on his smile, you’d have thought I’d just told him we’d found a donor kidney for his operation. ‘I’ve been looking online, but there are too many choices,’ he said. ‘Plus, my company expects the world.’ He grimaced. ‘They didn’t like the hotel they used last year, or the year before that. I’m in over my head, to be honest. I think I need a guiding hand.’

I had just the hand he was looking for, and some ideas about where to guide it.

But instead of jumping up and down shouting ‘Pick Me, Pick Me!’, I put on my professional hat and gave him our events brochure and the team’s contact details. Because normal hotel receptionists don’t launch themselves into the arms of prospective clients.

When he reached over the desk to shake my hand, I had to resist the urge to bob a curtsy. ‘I’m Chuck Williamson. It was great to meet you, Rosie.’

He knew my name!

‘And thank you for being so nice. You might have saved my ass on this one. I’ll talk to your events people.’ He glanced again at my chest.

No sooner had Chuck exited through the revolving door than my colleague, Digby, said, ‘My God, any more sparks and I’d have had to call the fire department.’

Digby was my best friend at the hotel and also a foreign transplant in Manhattan – where anyone without a 212 area code was foreign. Home for him was some little town in Kansas or Nebraska or somewhere with lots of tornadoes. Hearing Digby speak always made me think of The Wizard of Oz, but despite sounding like he was born on a combine harvester, Digby was clever. He did his degree at Cornell. That’s the Holy Grail for aspiring hotelies (as we’re known).

Digby didn’t let his pedigree go to his head, though, like I probably would have.

‘Just doing my job,’ I told him. But I knew I was blushing.

Our manager, Andi, swore under her breath. ‘That’s the last thing we need right now – some novice with another Christmas party to plan.’

‘That is our job,’ Digby pointed out.

‘Your job is to man the reception desk, Digby.’

‘Ya vol, Commandant.’ He saluted, before going to the other end of the desk.

‘But we do have room in the schedule, don’t we?’ I asked. Having just come off a rotation in the events department the month before, I knew they were looking for more business in that area. Our room occupancy hadn’t been all the company hoped for over the summer.

I’d love to tell you that I didn’t think any more about Chuck, that I was a cool twenty-five-year-old living her dream in New York. And it was my dream posting. I still couldn’t believe my luck. Well, luck and about a million hours earning my stripes in the hospitality industry. I’d already done stints in England and one in Sharm El Sheikh – though not in one of those fancy five-star resorts where people clean your sunglasses on the beach. It was a reasonable four-star one.

There’s a big misconception about hotelies that I should probably clear up. People assume that because we spend our days surrounded by luxury, we must live in the same glamour. The reality is 4a.m. wake-ups, meals eaten standing up, cheap living accommodation and, invariably, rain on our day off. Sounds like a blast, doesn’t it?

But I loved it. I loved that I was actually being paid to work in the industry where I did my degree. I loved the satisfied feeling I got every time a guest thanked me for solving a problem. And I loved that I could go anywhere in the world for work.

I especially loved that last part.

But back to Chuck, who’d been stuck in my head since the minute he’d walked through the hotel door.

I guess it was natural, given that I hadn’t had a boyfriend the whole time I’d been in the city. Flirting and a bit of snogging, yes, but nothing you could call a serious relationship.

There wasn’t any time, really, for a social life. That’s why hotelies hang out so much with each other. No one else has the same hours free. So, in the absence of other options, Digby and I were each other’s platonic date. He sounds like the perfect gay best friend, right? Only he wasn’t gay. He just had no interest in me. Nor I in him, which made him the ideal companion – hot enough in that freckle-faced farm-boy way to get into the nightclubs when we finished work at 1 or 2a.m., but not the type to go off shagging and leave me to find my way home on the subway alone.