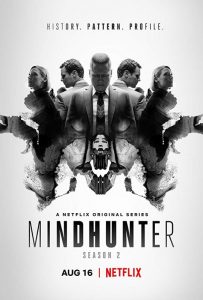 Before we get too far into October, I wanted to share some of my favourites/things I enjoyed from September.

My first favourite is series two of the Netflix show, Mindhunter.

OK so technically this was released in August but as I didn’t do a favourites for last month, I can give it a mention.

Series one, episode one had me totally hooked on this show. I pretty much bingewatched it over a day. I was beyond excited to get into the second series especially when you take into account how series one ended.

This was just as brilliant and amazing as the first and focuses on the Atlanta child murders whilst also continuing some plot points from the first series.

This series was incredible and I can’t wait for series three. It’s well written, has brilliant acting and is just… awesome. End of. If you’ve been wondering whether to give it a go, please do.

My second favourite is an app and it is Layton: Pandora’s box HD for mobile.

I have been a massive fan of the Professor Layton games from when it appeared on the Nintendo DS. I am not a big gamer but I love puzzle games and so this is right up my street.

Although I have played Pandora’s box before, it has been so long, it’s like playing a new game especially as I think they have added some new puzzles. I don’t remember playing them anyway so even if you’re familiar with the game, I think you will get something from this new format.

I was delighted to see it was available on the App Store and I love the fact that I can play it when I have a few minutes without having to carry the DS around.

The book I most enjoyed last month is I Wanted You to Know by Laura Pearson.