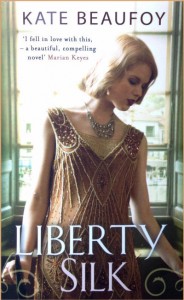 Thanks to Kate and Transworld, we had three copies of Liberty Silk to give away to celebrate it’s release in the UK.

Well done to Rebecca Carden from Cambridgeshire, Charlotte Ingham from the UK and Tammy Tudor from Greater Manchester. You’ve all won a copy of the book.

One beautiful dress is the key to three brave women’s destinies.

France 1919: Jessie is celebrating the last heady days of her honeymoon. But when her husband suddenly disappears she finds herself bereft. Until a chance encounter thrusts her into the centre of the intoxicating world of Parisian high life.

Hollywood 1945: Lisa has come a long way from her quiet, unassuming life in London and is taking Hollywood by storm. But all that glitters is not gold, and as the smoke and mirrors of the lifestyle she so longed for shatter around her there are some secrets she can never escape.

END_OF_DOCUMENT_TOKEN_TO_BE_REPLACED 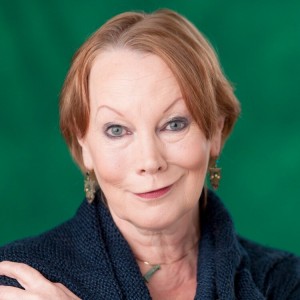 We are very excited to welcome Kate Beaufoy and her blog tour to Novel Kicks. Her new book, Liberty Silk was released by Transworld on 3rd July. We chat to Kate about her book (look out for our review soon,) her writing tips and the fictional character she’d like to meet…

Can you tell us about Liberty Silk and how the idea came about?

After writing a dozen novels as Kate Thompson, I really wanted to write something different. The idea for Liberty Silk came about when I found a cache of my grandmother’s letters in the attic. Written nearly a hundred years ago, they were entertaining, moving and full of fascinating detail about life after the Great War, when she and her artist husband spent their honeymoon traveling through France and Italy. I decided to use the letters as a backdrop to an epic story spanning three generations and three continents, and – because I was writing in a different genre – I took the opportunity to avail of a nom de plume. Beaufoy was my grandmother’s maiden name.

Are you a planner, and do you edit as you go?

Most of my plans consist of scraps of paper covered in indecipherable handwriting, which I discover lying around the house after the novel has been finished. Lots of my ideas get trashed during the writing process, as do some characters. I’ll fine a note to myself saying something like: ‘Louisa’s star sign is Gemini’, and then I’ll wonder ‘who the hell is Louisa?’

I never used to edit as I wrote, and was in the habit of notching up massive daily word count of two to three thousand words (one day I worked for thirteen solid hours and notched up six thousand!), but these days I edit rigorously and continuously – I’m lucky if I manage a thousand words a day (this does not suit all writers, many of whom prefer to finish before they edit). As for how the book ends: I usually have the last sentence in my head all the way through, from day one. And I always, always cry when I finish a novel. I’m actually inconsolable.

Is there a book you’ve read that has made a big impact on you?

I wish I could say there was, but I think that the impact books make is a cumulative thing. I don’t remember a time I couldn’t read, and every book I’ve opened since has made some kind of impact on me, whether positive or negative. You can learn a lot about writing from reading books that you consider badly written, and asking yourself why.

I can write mostly anywhere, but I love a space where I can spread notes, books, print-outs, photographs, etc. I know immediately where I can lay my hands on something, even though it all looks madly disorganised. I also prepare a flask of very strong black coffee at the start of every writing day, and often eat lunch at the computer. I do try and exercise every morning, but sometimes I start work almost the minute my eyes open, and spend the day working in bed, especially when I’m approaching the end of a novel. Then I lock myself away for thirty-six hours until I type ‘The End’.

If you could time travel for a day, where would you go and why?

It depends on the book I am working on. For Liberty Silk I should have loved to have travelled to the French Riviera in the 1920s to meet up with the crowd of hedonists I wrote about – Coco Chanel, Pablo Picasso, Scott Fitzgerald and his wife Zelda, who was the darling of the jazz age. And of course, there is the allure of 1940s Hollywood, an era that also features in the book. It seems über glamorous, but during the days of the big studios women – even some of the most fabulous stars – were treated like so much cattle. The book I am currently working on is set during the Victorian era; but since much of the action takes during the time of the Irish famine, I can say that it is one of the periods in history I would emphatically least like to visit.

I would like to meet Teddy Lloyd, the cool, rather sexy art master in Muriel Spark’s famous novel, The Prime of Miss Jean Brodie. The character is said to be based on my grandfather, who was a remarkably charismatic man.

It changes every day. Yesterday it was ‘lachrymose’, today it is ‘svelte’.

1: Here is a brilliant trick! I learned it by accident, when I cut and pasted an extract of my work into the body of an email and read it back. Either do just that, or reformat your writing, using a different font and paragraph layout. This helps you to read it with a completely new sensibility.

2: Don’t announce to anyone who isn’t a close friend that you’re embarking on a novel. You will regret it every time someone asks if you have finished it/found an agent/when your publication date is.

3: An extension of tip 2, above: Don’t be tempted to post details of your progress on social media. Aspiring writers will not love you when you declare that you have completed 100,000 words when they are struggling with their first chapter.

4: When your first draft is finished, don’t show it to ANYONE who does not love you. Even the best of friends can have an agenda, and Schadenfreude is an occupational hazard. You don’t need to be told that you’re the new Donna Tartt, but you do need to be handled with kid-gloves.

5: Try not to let your research show. You may have done painstaking homework on beautiful Bugatti motors, but your reader does not need to know that the 1919 models were fitted with overhead camshaft 4-cylinder 1,368cc engines.

One beautiful dress is the key to three brave women’s destinies.

France 1919: Jessie is celebrating the last heady days of her honeymoon. But when her husband suddenly disappears she finds herself bereft. Until a chance encounter thrusts her into the centre of the intoxicating world of Parisian high life.

Hollywood 1945: Lisa has come a long way from her quiet, unassuming life in London and is taking Hollywood by storm. But all that glitters is not gold, and as the smoke and mirrors of the lifestyle she so longed for shatter around her there are some secrets she can never escape.

London 1965: Cat, headstrong and independent, drawn to danger and passionately opposed to injustice, has no idea of the legacy that precedes her. Once past secrets are unveiled, she has the chance to find out what liberty really means…

An evocative story of survival, betrayal and the invincibility of love.

Liberty Silk was released by Transworld on 3rd July and is available in paperback and e-book. Buy from Amazon.