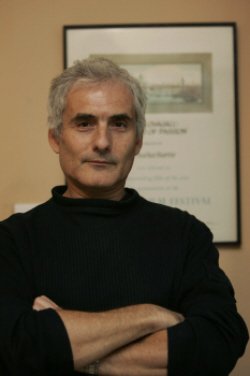 I’d like to welcome Charles Harris to the blog today. Hello Charles. Thank you so much for joining me today. Your first fiction novel is called The Breaking of Liam Glass. Tell me a bit about it and what inspired the idea?

Hi Laura, thank you for having me.

The Breaking of Liam Glass is a crime-satire – not so much a Whodunnit as a What-They-Did-After-It! It follows the twenty-four hours after a teenage footballer, Liam Glass, is stabbed and in hospital in a coma, and the piranhas – the journalists, politicians and police – who all want to use him to build their careers.

The idea came from both seeing the rise in knife crime in our cities that seems unstoppable and also looking at the way newspapers play such a crucial part in our lives, and yet are almost unaccountable. Even the good ones. And to some extent they all can be good at times. It’s easy nowadays to attack the tabloids, but they have mounted important campaigns in the past and it would be a poorer world without them.

In Liam Glass, the central character, Jason Crowthorne, is a young wannabe journalistic piranha who first discovers Liam Glass’ case and realizes this could be his ticket to tabloid heaven. Yet at the same time he is honestly shocked at seeing kids being stabbed and wants to do something that will stop it.

As the story develops, Jason is torn between his better instincts and promoting his own career. In the process, he gets sucked into a dark yet comic spiral of lies and deceit, each step trying to escape the consequences of the one before. And soon discovers that there are bigger and nastier piranhas than him in the sea.

What do you think makes a good main character? Which elements are most important?

There’s no formula – I wish there were, it would make my life a lot easier. It’s like finding a partner – you can specify all the traits you want on Tinder but ultimately it comes down to a certain magic: you just want to spend more time with this person.

Some characters in the novel just arrived, fully formed, and were a joy to write: a nice but dim gym instructor; a local politician who is desperate to get re-elected but has no idea of her own; a put-upon detective constable who makes a single bad mistake and is urgently looking for someone to pin it on.

Whereas Jason hid himself from me and had to be slowly teased out.

Having said that, there are some rough guidelines – you want characters who are full of energy and contradictions, facing big dilemmas yet capable of taking action.

Jason finally revealed himself to be a great person to spend time with, which is a good thing as I lived with him for many years.

His heart is in the right place and yet he keeps doing the wrong things. You fear for him and yet in some ways you long for his comeuppance. In all, he turned out to be a wonderful comic hero to write.

What is your writing process like? Are you much of a planner? Edit as you go?

In theory, I try to plan, but not too much, and then not edit until I have a full draft. But each book tells you what it needs. It’s like sailing single-handed across the Atlantic – you start off with the best of intentions and by the end you’re clinging onto a spar, soaked to the skin and searching the horizon for dry land.

Which three books could you not live without and why?

More like three hundred, but currently my top three would be Scoop, Catch 22 and Bonfire of the Vanities.

• Scoop for Evelyn Waugh’s brilliant depiction of the values and contradictions of the newspaper business;
• Catch 22 because every line that Joseph Heller writes both makes you laugh and pins some human hypocrisy like a butterfly on a pin;
• and Bonfire for Tom Wolfe’s ageless and constantly funny depiction of the hubris that led to the social and economic car crash we’re living through today.