It Felt Like A Kiss by Sarra Manning – Blog Tour

It Felt Like a Kiss by Sarra Manning – Blog Tour: Sarra’s Writing Space 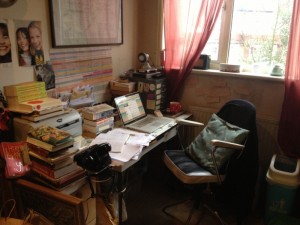 This is as tidy as I ever get, which is practically minimalist compared to how my desk used to look when I was on magazines. The piles of paper, mags, CDs, books, were so high that I literally could not see over the top of them. One of my proudest yet shaming moments was when an ergonomic expert took a picture of my workspace and showed it to the entire company as a good example of a fire hazard. So, progress!

Desk – Fifties, formica kitchen table, I got for free when I bought a 1930’s lounge suite, which fell apart within six months. The table is still going strong.

Chair – 1960’s chair that started life in a French hairdressers.

Macbook Pro – I have NEVER been PC, never will. Don’t even get me started. Although I write on a laptop, I have to work at my desk, no sprawling, legs akimbo on the floor in madcap Carrie Bradshaw-esque abandon for me. 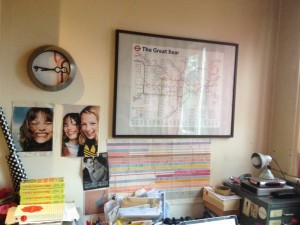 Papers – that’s the marked up manuscript of the first draft of the novel I’m working on right now. Unfortunately, most of the bits I did mark-up I’ve now decided to cut and the bits I didn’t mark up, I wish I had. It’s a process. That notebook also has about version five on my outline.

Competitions: Win a Copy of It Felt Like a Kiss 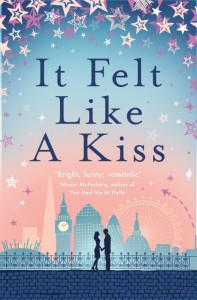 THIS COMPETITION IS NOW CLOSED.

To celebrate the release and blog tour of It Felt Like a Kiss by Sarra Manning, we’ve got five copies of the book to give away.

Ellie Cohen is living her dream. A great job at an exclusive Mayfair art gallery, loyal mates, loving family, and really, really good hair. Well, there’s the famous rock-star father who refuses to acknowledge her and a succession of ‘challenging’ boyfriends, but nobody’s perfect. But when a vengeful ex sells Ellie out to the press, she suddenly finds herself fighting to keep her job, her reputation and her sanity. Then David Gold – handsome, charming but ruthlessly ambitious – is sent in to manage the media crisis . END_OF_DOCUMENT_TOKEN_TO_BE_REPLACED

Ellie is living her dream and  thinks she has everything pretty much together. She has a job that she loves, great mates, a loving family and a great boyfriend, Richey. The only bad point is the rockstar Dad who refuses to acknowledge her existence.

However, when her friends stage a relationship intervention, saying they saw Richey doing something he shouldn’t, Ellie goes into denial until she sees it for herself.

She breaks up with him not realizing he will carry out revenge in a horrible way. He steals a box containing Ellie’s biggest secret and before long, the British press is camped on her doorstep, painting her as a fame hunter, obsessed with getting herself in the paper and using the fact that Billy Kay is her father to do it.

David Gold, Kay’s lawyer is assigned to look after the problem… and Ellie.

David doesn’t trust Ellie and to begin with, Ellie doesn’t care much for him either so falling in love is the last thing on their minds – especially as Ellie’s life is falling apart around her.

I loved Ellie. She’s essentially a good person who wants to do right by all around her, although that does sometimes mean she is swept along with other people’s ideas. She loves her job and has great mates (Lola and Tess were hysterical in places,) and I did feel so sorry for her when everything began to go wrong and the more that goes wrong, the more she looses control. David Gold does sound like a scrummy hero and definitely someone I would want on my side if I needed a lawyer (he was endearing even though I did want to slap him across the face for some of his behavior towards Ellie.)

The book is quite long and when I started, I did worry I was going to find some of it hard going to read because of the length (which I have found with some books of late,) but the plot had me turning the page, desperate to find out what was going to happen next and whether Ellie would finally get to come face to face with the man who abandoned her when she was a child. This book, at one point, had me shouting ‘you go girl,’ out loud. I cheered, felt badly for Ellie when she was finding it difficult and I wanted her to have a happy ending.

I was actually a little disappointed when I finished this book because it ended and did miss Ellie and David for a while after. This book was great and I recommend it – especially if you want to curl up with tea and a book or are escaping to where the sun is and want a holiday read.

It Felt Like A Kiss by Sarra Manning is out now published by Corgi, £6.99