Competitions: March’s Winner for Which Book is This Anyway? 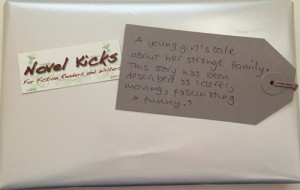 March’s Which Book is This Anyway?

The prize is a book but we’ve not revealed the title and won’t until the winner receives it.

Many of us judge books by their covers and make our choices based on that and the accompanying blurb. Our competition adds a little mystery.

It could be a recent new release or a well-known classic. Who knows? We’ve not even revealed the genre. It’s a surprise.

All we did say about this book is that ‘A young girl’s tale about her strange family. This story has been described as clever, moving, fascinating and funny.’

Thank you to every one who entered and well done to Carol Peace who has been drawn out of the hat this month. Your book will be on its way to you soon.

Keep your eye out for April’s competition.

2 Responses to Competitions: March’s Winner for Which Book is This Anyway?