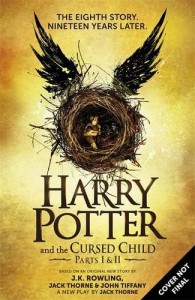 2016 is bringing so many new books and I can’t wait to get my hands on them. I have a feeling it’s going to be a great year for books. Here are five of the books being released in 2016 that I am most excited to read.

I can’t, can’t can’t wait for this to be released and on Harry Potter’s birthday too. The eighth story in the series, this is a script of the upcoming stage play. It’s written by Jack Thorne and is based on an original story by JK Rowling, Jack Thorne and John Tiffany. This is the closest I am going to get to the play (unless some magic grants me a ticket) so July can not come quick enough.

Based on an original new story by J.K. Rowling, Jack Thorne and John Tiffany, a new play by Jack Thorne, Harry Potter and the Cursed Child is the eighth story in the Harry Potter series and the first official Harry Potter story to be presented on stage. The play will receive its world premiere in London’s West End on 30th July 2016. It was always difficult being Harry Potter and it isn’t much easier now that he is an overworked employee of the Ministry of Magic, a husband, and father of three school-age children. While Harry grapples with a past that refuses to stay where it belongs, his youngest son Albus must struggle with the weight of a family legacy he never wanted. As past and present fuse ominously, both father and son learn the uncomfortable truth: sometimes, darkness comes from unexpected places. 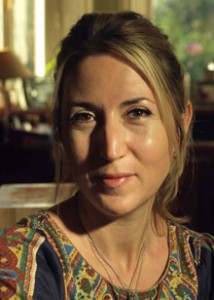 Also due to be released in July, I Found You is the latest novel from Lisa Jewell. I adore Lisa’s novels. I always look forward to being able to escape into her fictional worlds for a while and so I am eagerly awaiting her new book. It sounds fantastic.

‘How long have you been sitting out here?’
‘I got here yesterday.’
‘Where did you come from?’
‘I have no idea.’

East Yorkshire: Single mum Alice Lake finds a man on the beach outside her house. He has no name, no jacket, no idea what he is doing there. Against her better judgement she invites him in to her home.

Surrey: Twenty-one-year-old Lily Drew has only been married for three weeks. When her new husband fails to come home from work one night she is left stranded in a new country where she knows no one. Then the police tell her that her husband never existed. 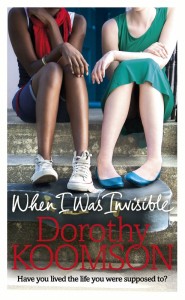 When I Was Invisible by Dorothy Koomson (Century, 5th May 2016.)

‘Do you ever wonder if you’ve lived the life you were meant to?’ I ask her.
She sighs, and dips her head. ‘Even if I do, what difference will it make?’

In 1988, two eight-year-old girls with almost identical names and the same love of ballet meet for the first time. They seem destined to be best friends forever and to become professional dancers. Years later, however, they have both been dealt so many cruel blows that they walk away from each other into very different futures – one enters a convent, the other becomes a minor celebrity. Will these new, ‘invisible’ lives be the ones they were meant to live, or will they only find that kind of salvation when they are reunited twenty years later? 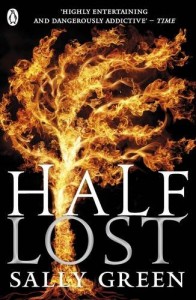 I absolutely adore the Half Bad series and Half Lost is the third book to be released. I am trying to recommend this series to as many people as possible. This is a YA series but I think it has as much appeal for adults. Nathan is a brilliant lead character and I couldn’t put Half Bad down when I started to read it. I want to know what is next for him. Good job I only have until March to find out.

Nathan Byrn is running again. The Alliance of Free Witches has been all but destroyed. Scattered and demoralized, constantly pursued by the Council’s Hunters, only a bold new strategy can save the rebels from total defeat. They need the missing half of Gabriel’s amulet – an ancient artefact with the power to render its bearer invincible in battle.

But the amulet’s guardian – the reclusive and awesomely powerful witch Ledger – has her own agenda. To win her trust, Nathan must travel to America and persuade her to give him the amulet. Combined with his own Gifts, the amulet might just be enough to turn the tide for the Alliance and end the bloody civil war between Black and White witches once and for all… 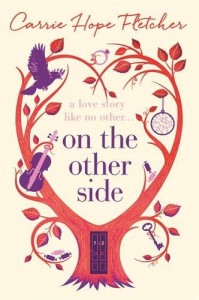 Finally, the last book I am looking forward to reading is On The Other Side by Carrie Hope Fletcher. The premise for this book sounds soooo good. I’m annoyed I didn’t think of it first plus the cover is so beautiful. Following on from her non-fiction book, All I Know Now which was released last year, this is Carrie’s first novel and going by the chapter that was revealed in the special edition of All I Know Now, it’s going to be a great debut.

Evie Snow is eighty-two when she quietly passes away in her sleep, surrounded by her children and grandchildren. It’s the way most people wish to leave the world but when Evie reaches the door of her own private heaven, she finds that she’s become her twenty seven- year-old self and the door won’t open. Evie’s soul must be light enough to pass through so she needs to get rid of whatever is making her soul heavy. For Evie, this means unburdening herself of the three secrets that have weighed her down for over fifty years, so she must find a way to reveal them before it’s too late. As Evie begins the journey of a lifetime, she learns more about life and love than she ever thought possible, and somehow , some way, she may also find her way back to her long lost love…

Which books are you looking forward to reading in 2016?