Guy Mankowski on Writing How I Left The National Grid

The writing process for How I Left The National was so distinct from that of my two previous novels, that it was almost like learning to play the keyboard after you’ve been playing guitar. This seems an apt, if somewhat pretentious description, given that this novel follows the story of an eighties post-punk musician, Robert Wardner. Wardner vanishes after a particularly controversial appearance on Top Of The Pops. During this performance he commits a shocking act which, during the more buttoned-up era of 80s Britain, causes enough of an impact that he never recovers.

My first novel, The Intimates, was mostly written over an intense eight-week period when I was 21. I lived and breathed the novel every single day almost in a hallucinogenic way. My second novel, Letters from Yelena, was written over a year and a half, and its writing coincided with a research trip to Russia in which a great deal of information about the world of Russian ballet was absorbed. This novel was set mainly in 80s Manchester, only a few hours away from me.

Somehow, it took over three years. 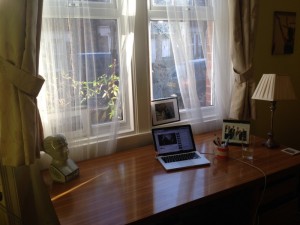 For my first two books ‘the voice’ of the protagonist was the starting point. But finding Wardner’s voice took a long time. At first his voice was rather rich, descriptive and even romantic. He described stealing away on trains, without a ticket, to spend nights in seedy underground clubs in Brighton. He partied the night away with other struggling musicians, painters, and drag acts.

But then I started to research what a post-punk singer would really be like. I listened compulsively to post-punk records, such as Magazine’s Real Life and Joy Division’s Unknown Pleasures. I took to social networking to learn more, and tweeted a question to Jehnny Beth, singer from the Mercury Music Prize shortlisted band Savages. I was surprised when she invited me to interview her. This led to further interviews, with contemporary artists like Gazelle Twin and LoneLady. I drank pints with them in empty pubs, and talked of how the urban environment had shaped the sound of their music. I learnt what a struggle it was to make music in an age of austerity. When you are competing with all those endless identikit X Factor contestants, with the weight of Simon Cowell (sometimes literally) upon them.

I spent a lot of time getting familiar with Manchester, dancing in its nightclubs and undertaking inner city walks. I wanted to get to know the setting that Wardner would have come from in intimate detail, so I could call upon it at will. I even created a fictional address for him, in a rather grim sink estate in Manchester. I wandered around there for long enough to be deemed suspicious.

I watched interviews with musicians such as Mark E. Smith, who I had been conscious of when conceiving Wardner. I realized that Wardner would have carried a ferocious, if cerebral, anger. He would not be as melancholy as he had been in early drafts and, like Mark E. Smith, he would live in the moment. He would be direct in his action, if opaque in his reasoning. Wardner was re-written to be more uncompromising. His voice began to emerge strongly: succinct, brittle, passionate.

Other characters were inspired by more mysterious means. I am loathe to give too much away, but characters were variously inspired by intriguing people in rock biographies, and by intriguing people I met in fleeting encounters. As I redrafted the novel my focus was on putting these characters in situations that allowed them to be portrayed at their most colourful. At this point the project came alive for me. I had at my disposal a cast of damaged, brilliant, eccentric and sometimes downright frightening characters. From there on, it was a pleasure to be in their company.

Getting the book published, though, was another story.

It is being launched at The Cluny, Newcastle, on 28/02/15, on a night which will feature readings, comedy, and music from Kingsley Chapman and The Murder, Retriever and Hausfrau. You can buy tickets from here –http://www.thecluny.com

Guy can be found at www.guymankowski.com or on Twitter @Gmankow.