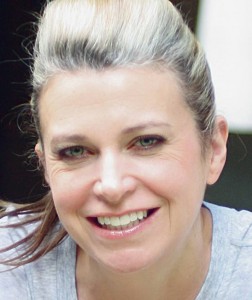 Jane Fallon joins us for day twenty-eight of our NaNoWriMo Author Advice. Jane’s books include Getting Rid of Matthew and Foursome. Her new book, Skeletons, is out next year. Jane gives us her five tips for new writers.

1. Keep moving forward. Don’t get stuck editing the same passage over and over again. There’s time for that later. I think that a first draft is all about getting the whole story down on paper as quickly as you can, and then sitting back and assessing what you’ve got.

2. If you have a block write through it. Don’t give up because you are stuck on a passage that’s going to be difficult to write. Write a version of it, however bad. Eventually you’ll hit a point where the story flows again. And then it’ll be easy to go back and rewrite.

3. Don’t think you have to write in perfect, grammatically correct, English. You’re telling a story not doing an exam…Otherwise all books would read the same. If you like the way your narrative sounds then fight for it. Don’t make changes you don’t agree with just because someone tells you you’ve split an infinitive or mixed a metaphor.

4. Listen to how people speak. Nobody I know speaks in well thought out, articulate sentences all the time. They stop and start, they change thread halfway through. Keep it real.

5. Be sparing with your use of names. Generally in conversation we only use the other person’s name for emphasis or if we’re telling them off. Having characters say each other’s names all the time is a major bug bear of mine. It sounds so fake and stilted. If you’re worried that if they don’t then the reader won’t know which character is speaking, then there’s something more fundamental wrong with your dialogue.