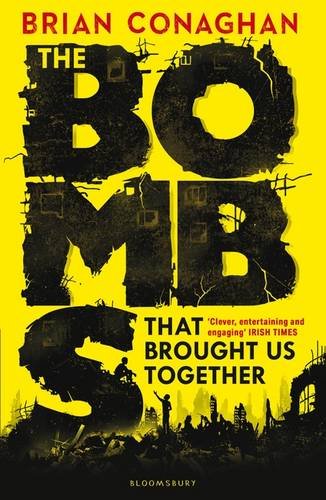 Brian Conaghan has won The Costa Children’s Book Award 2016. He won for his third novel, The Bombs That Brought Us Together which was published by Bloomsbury Childrens. His win was announced earlier this month.

Fourteen-year-old Charlie Law has lived in Little Town, on the border with Old Country, all his life. He knows the rules: no going out after dark; no drinking; no litter; no fighting. You don’t want to get on the wrong side of the people who run Little Town. When he meets Pavel Duda, a refugee from Old Country, the rules start to get broken. Then the bombs come, and the soldiers from Old Country, and Little Town changes for ever.

Sometimes, to keep the people you love safe, you have to do bad things. As Little Town’s rules crumble, Charlie is sucked into a dangerous game. There’s a gun, and a bad man, and his closest friend, and his dearest enemy.

Charlie Law wants to keep everyone happy, even if it kills him. And maybe it will.

When asked by The Scotman, Conaghan said “the book is about how a big power can overwhelm a less powerful country. In some ways it is an imagining of what would happen if Scotland went independent and England just decided one day as a big superpower that they were going to take it back.”

Brian was born and raised in Scotland but now lives in Dublin. He’s worked as a teacher and his previous novels include The Boy Who Made It Rain and When Mr Dog Bites.