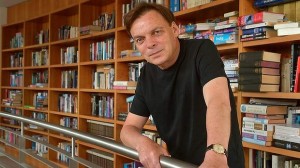 Graeme Simsion’s brilliant debut, The Rosie Project has been our book corner title this month.

It began life as a screenplay before he wrote the novel. Graeme joins us to talk about his new book, his favourite word and editing.

Can you tell us about your book, The Rosie Project?

The Rosie Project is the story of Don Tillman, a socially-challenged genetics professor, and his search for a life partner. Don constructs a 16-page questionnaire to find the perfect woman. Instead he finds Rosie, a woman who ticks none of the boxes, but who requires his help to find her biological father through surreptitious DNA testing of the candidates – every male student in her mothers’ medical graduation class. It’s a comedy – but I like to think it explores some serious ideas and may provoke a few tears as well as laughter..

There’s no such thing as a typical writing day for me. I don’t write every day because I have other commitments (meeting readers and booksellers, answering questions from bloggers…) and because I spend time thinking about what I’ll write, or how I’ll improve what I’ve written. When I was working on the sequel to The Rosie Project in New York last Christmas, I set myself a target of 2,000 words per day – and no drink in the evening if I didn’t make it. It worked well, and some days I stopped with my 2,000 words ground out, while on others I was on a roll and kept going. But those days weren’t typical. I haven’t written anything today, but I’ve thought hard about some feedback from my editors.

Do you edit as you go or do you wait for a first draft?

I do some editing as I go. Often, after I’ve written a sequence (excuse the screenwriting language!), I’ll read it to my partner, partly to see how it sounds and partly to get her reaction – in particular, is she laughing? But there’s always a process of editing after the completion of the first draft – good writing is re-writing.

Do you cast your characters? Who would you like to see play Don and Rosie?

I studied screenwriting before I began writing novels. Some screenwriters ‘cast’ their characters – they write with particular actors in mind. I don’t. I have great faith in the ability of casting directors to do a better – and more creative – job of choosing actors than me. I’d like to be surprised – gobsmacked – by the choice of actors, and then blown away by how well they interpret the roles. Think Russell Crowe in A Beautiful Mind. Who’d have thought it? 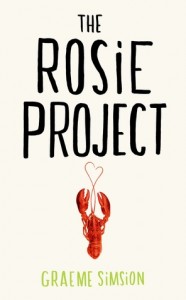 Which scene in the book do you think is the most important for Don?

I know which one is most important for me: the Aspie kids scene, because it does so much to establish Don as a character while (I hope) being entertaining in itself and relevant to the story set-up. I think the scene which has the most impact on Don’s view of the world – and hence his behaviour – is the one in which he realises that Rosie has “considered him as a partner”.

Who would be your ideal dinner guests?

I think six is a good number – more than that and the conversation starts to break into smaller groups. I think Jesus, Mohammed, Buddha and Richard Dawkins. Plus my wife and me. And we could have it out once and for all.

What are you working on at the moment?

Editing the sequel to The Rosie Project. I’ve recently submitted the first draft of the screenplay for The Rosie Project to Sony Pictures, so expect to have more to do on that soon. And answering questions for Novel Kicks.

1. Enrol in a writing class – or at least join a writers’ group. A class will give you theory, discipline, feedback, industry savvy and encouragement.

2. Plan. Yes, some writers write by the ‘seat of their pants’ without a plan, and if that works for you, good luck and I’ll shut up. I bet it won’t. I bet you’ll get stuck about 25,000 words in, or later you’ll find you’ve written an unstructured mess. If that happens, go back and write a synopsis, then a chapter-by-chapter summary. Then start writing again with confidence you know where you’re going.

3. Write for publication. With everything you write (or almost everything) , think of where it could be published, and aim to submit it. It will encourage you to do your best, to screw up the printed manuscript you were going to send, and make it that bit better.

4. Write some short stories. They’re great for experimenting without committing a year and if you submit them for publication, you’ll get feedback and possibly a good line to add to your cv, enquiry letter, novel submission.

5. Re-write. Put your work aside, come back to it a couple of weeks later. Repeat several times. You can always make it better.

The Rosie Project, publised by Penguin and is available in Paperback and e-book.