Sue Moorcroft is the author of Want to Know a Secret, Starting Over and Is This Love? 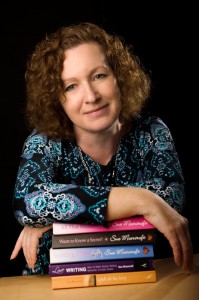 Sue also contributed to Truly Madly Deeply which is a collection of stories with other authors including, Carole Matthews, Adele Parks and Katie Fforde. We chat to Sue about her advice for writers, whether she’s a planner and her favourite word.

Verbal wit, usually. I don’t watch a lot of TV but I do love QI and Have I Got News for You? I’m also a huge fan of The Big Bang Theory, which is one of the best and most consistent comedies I’ve seen. I love sharing chat and laughter over a meal with my friends. And teenagers are just inherently funny. It’s their world view, I think.

This is incredibly self-important of me, but I’d love to meet one of my own characters, Ratty, from Starting Over. I think he was the first hero I got right, and he’s been one of my most popular; the only one of my heroes to have received his own fan mail. If I’m allowed to choose Ratty then I would like to be Tess, my heroine from the same book. Preferably on one of the days when Ratty’s not irritated with her.

Yes, but messily. I begin with central author bios and look at those central characters from the point of view of their family, colleagues, friends, spouses or whoever, because I feel that it gives me a three-dimensional view of them. I like to know any quests that the hero and heroine have, and if I can make those quests conflict. I like to know what makes my hero and heroine want to be together and what is keeping them apart. (If I don’t know that last point, there’s potential to write a very short book.) I like to know the ending, to some degree, although I find endings difficult.

Typically, I know the first half of the book when the compulsion to begin kicks in. I love the first ten thousand words, because nothing’s gone wrong. Then it gets harder to keep all my plates spinning.

My WIP is the book I’ve planned in most detail. It’s about what happens when two people who used to be in love find themselves sharing a 42’ boat for the summer. I needed to plot so much backstory that I honestly thought about making the backstory the book at one time. I made copious use of sticky notes.

I use a timeline as I write. Successive editors have told me that I’m timeline-blind so I keep trying to prove them wrong.

Yes, and I have to be stern with myself not to savour the editing at the cost of writing new words. One Monday, I wrote 5000 words – a massive number, for me – and I began to edit them. By Friday I had only 2000 of those words left and I realised that something had to change. So now I limit how much editing I do as I go along, in favour of progress. But I write several drafts.

What’s the best piece of writing advice you’ve ever been given?

‘Don’t make enemies.’ That advice may refer more to publishing than writing.

Who would be your ideal dinner guests?

Both of my sons, Damon Hill, Nevil Shute, David Bowie and my dad.

Leaving aside one that you won’t want me to type here, I’ve just learned a great new word from The Big Bang Theory – homunculus. It refers to a miniature but perfectly formed human. Next time someone tells me I’m only the size of a hobbit, I’ll tell them I’m an homunculus.

Do you get writers block and if so, how do you deal with it?

I can’t afford writers’ block. I do find that sometimes a piece of writing will turn to treacle and, because I do lots of things, such as columns, teaching and mentoring, I will give my brain a break by turning to a different project for a while. If the deadline will let me.

May I have two? The first was when I received the phone call from my agent in 2004 to say that my first book had sold. That was Uphill All the Way. The second was when Love & Freedom won the Best Romantic Read Award in 2011.

Learn about publishing as well as writing

Go to conventions, conferences, readings, library talks, writing groups etc to hang out with other writers and network with industry professionals.

Sue Moorcroft writes romantic novels of dauntless heroines and irresistible heroes. Is this Love? was nominated for the Readers’ Best Romantic Read Award. Love & Freedom won the Best Romantic Read Award 2011 and Dream a Little Dream was nominated for a RoNA in 2013. She received three nominations at the Festival of Romance 2012, and is a Katie Fforde Bursary Award winner. She’s vice chair of the Romantic Novelists’ Association and editor of its two anthologies.

Sue also writes short stories, serials, articles, writing ‘how to’ and is a competition judge and creative writing tutor.