Review: That Night by Chevy Stevens 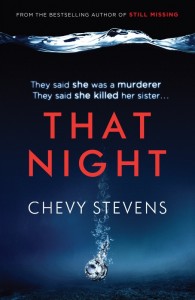 That Night is the latest novel from author, Chevy Stevens. Here’s the blurb:

Eighteen-year-old Toni and her boyfriend, Ryan, were wrongly convicted of the murder of her younger sister.

Seventeen years later, she’s out on parole and back in her hometown, but she’s struggling to adjust to a new life on the outside. Ryan is convinced he can uncover the truth; her mother still doesn’t believe Toni’s innocent; and the former high school girls who made Toni’s life miserable may have darker secrets than anyone can imagine. Before Toni can move forward, she must take a terrifying step back to her past to find out the truth and clear her name, before it’s too late.

I am new to Chevy’s books and so I didn’t know what to expect but reading the blurb, I found I was definitely intrigued. This book certainly appealed to my love of mysteries as I love trying to figure out what is going on.

That Night follows Toni through three stages of her life – her life as a teenager prior to the death of her sister, her situation through the trial and finally her life once she’s released from prison after serving her sentence for her sister’s murder.

The suspense is held well throughout the book. I had almost worked out what had happened and who but I couldn’t figure out why until the great twist at the end. This equalled in me not being able to put this book down. As it is covering various points in her life it does jump around a little as a result but the story as a whole ties together well I thought.

I felt sorry for both Toni and Ryan. They were both misunderstood. I found her mother to be a little annoying as a character as she didn’t seem to like Toni very much (even before she is accused of murder,) and I couldn’t really understand why this was. I also seriously didn’t like Shauna from the beginning (but I am guessing with her that this was the aim.)

I found the section where Toni adjusted to life after prison interesting to watch as you see her trying to get her life back together whilst trying to find the truth despite the odds being against her. I liked reading about the relationships she formed and how family doesn’t always have to be a blood relation. You don’t get to see much of Ryan’s story beyond Toni’s. That’s the only thing I would add. I want to know more about Ryan’s life through it all too as I got attached to these two people.

Simply put, I loved this book.

That Night was released by Sphere (December 2014.) It’s available in most bookshops and online. Click here to view on Amazon 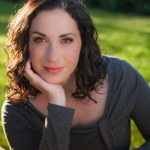 A little about Chevy:

Chevy Stevens grew up on a ranch on Vancouver Island and still calls the island home.  She was working as a  Realtor when she had an idea that became the inspiration for Still Missing. This book went on to become a New York Times bestseller and win the International Thriller Writers Award for Best First Novel.  Chevy enjoys writing thrillers that allow her to blend her interest in family dynamics with her love of the west coast lifestyle. When she’s not working on her next book, she’s camping and canoeing with her husband and daughter in the local mountains. Chevy’s previous novels include Still Missing, Always Watching and Never Knowing

To find out more about Chevy, visit her website: http://chevystevens.com/

Read our interview with Chevy.

(Thank you to Sphere for the review copy.)

One Response to Review: That Night by Chevy Stevens